A few months ago, I wrote a blog post about the Realities of Feeding Twins which included my story and thoughts on breastfeeding, pumping, and supplementing with formula. At the time, the babies were about 3 months old and I was still pumping and supplementing with formula. I stopped pumping when they were 4 months old because the day had finally come when all I wanted to do was hold Wren while she was napping, but instead, I had to put go put her in her crib for her nap so that I could go and pump. I hated that I was spending more time with my breast pump than I was with my babies, so I stopped, and we now exclusively feed the twins formula. Now at 10 months old, the babies drink their formula so much faster (it was taking us 45-60 minutes per feed before, now it’s only 20-30 minutes) so now we have more time to play, and today I’m sharing all of the Brain Building Games we play with the babies between their feeds and naps! 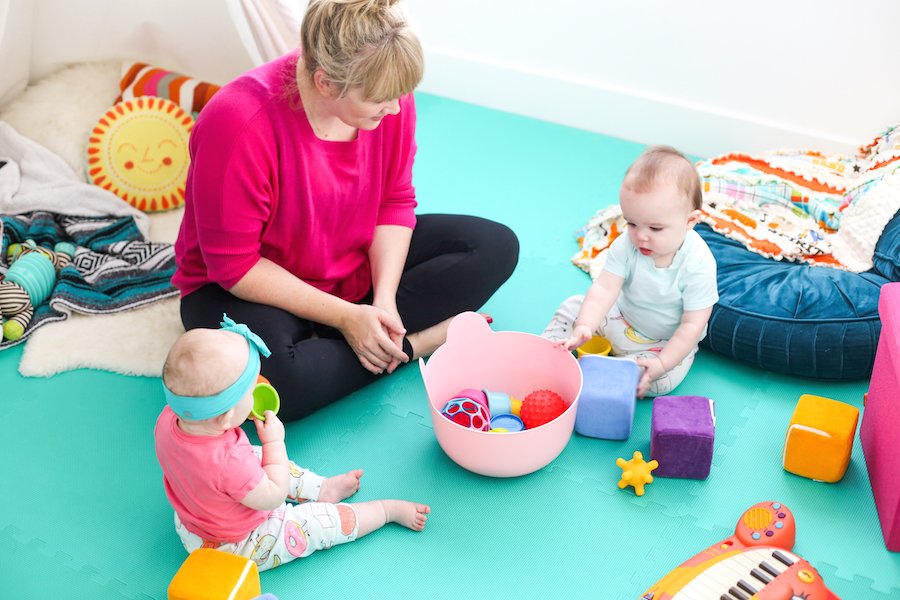 Since we started with Enfamil® in the hospital, we continued feeding the babies with Enfamil when we got home. Enfamil® is the #1 brand of infant formula recommended by pediatricians and has been trusted by hospitals for over 25 years. And a few months ago, I tried the Enfamil NeuroPro™ formula which has a brain-building fat-protein blend of MFGM and DHA previously only found in breast milk*.

MFGM has been clinically shown to help close the gap in cognitive development between formula-fed and breastfed infants**.

Cognitive development relates to the way a newborn learns, acquires knowledge and interacts with his/her surrounding environment. This includes the areas of memory, concentration, attention and perception. There is a growing body of research that indicates that nutrition early in life may be important for learning later in the preschool years. (Source Enfamil®.)

Enfamil NeuroPro™ is the first and only formula to add MFGM as an ingredient in amounts supported by clinical research. 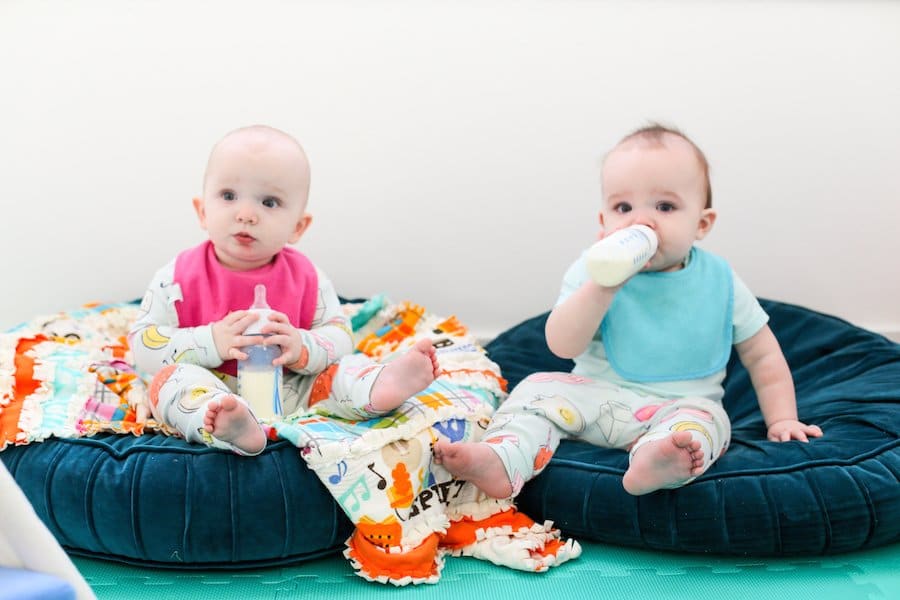 Right now, they love knocking over stacked blocks! I bought these soft blocks for them a few months ago knowing it was a bit too early, but they LOVE them now. I stack the blocks up and Wren and Hank knock them over! We do the same thing with some stackable cups – I try to stack them up from largest to smallest before one of them knocks the tower over! 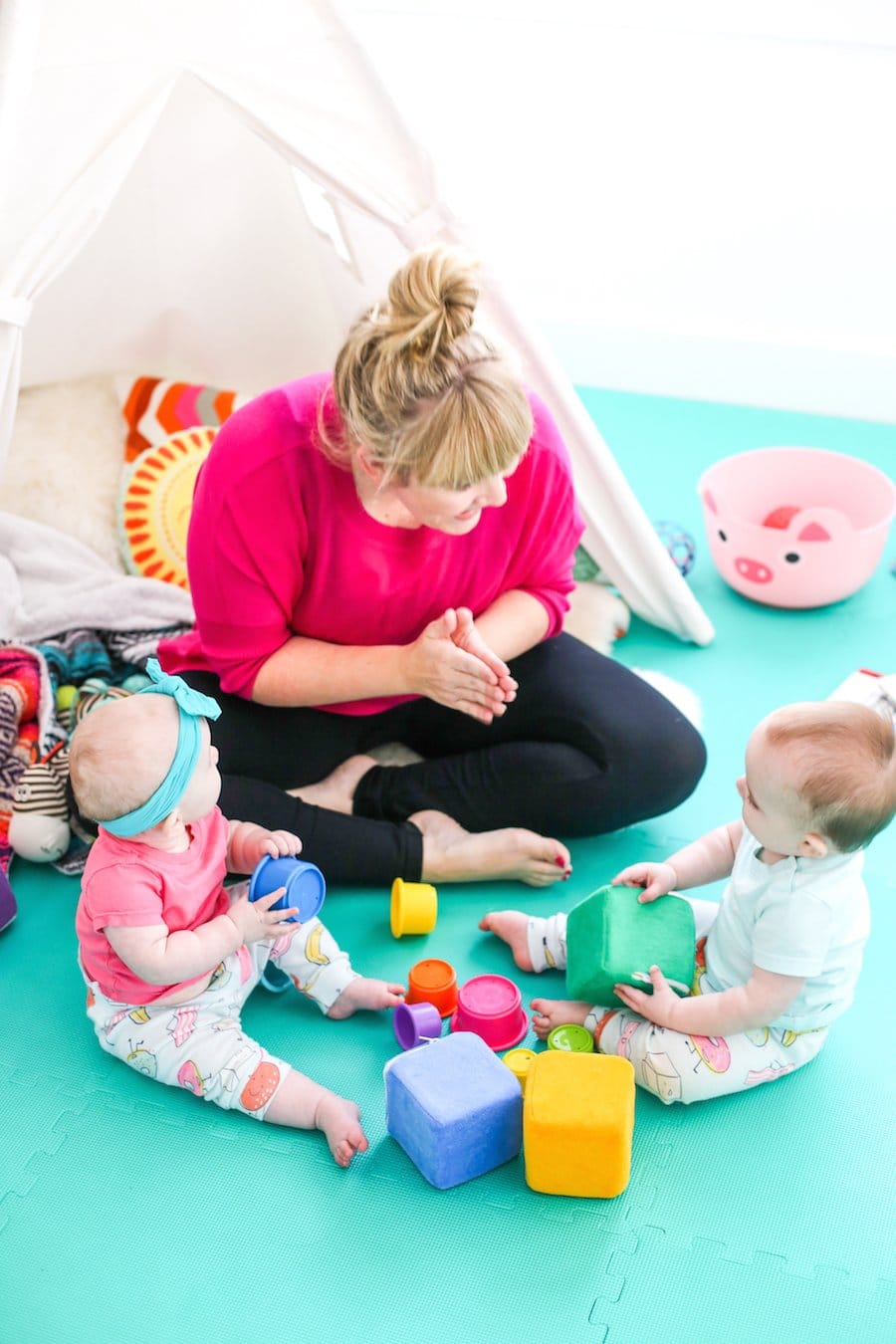 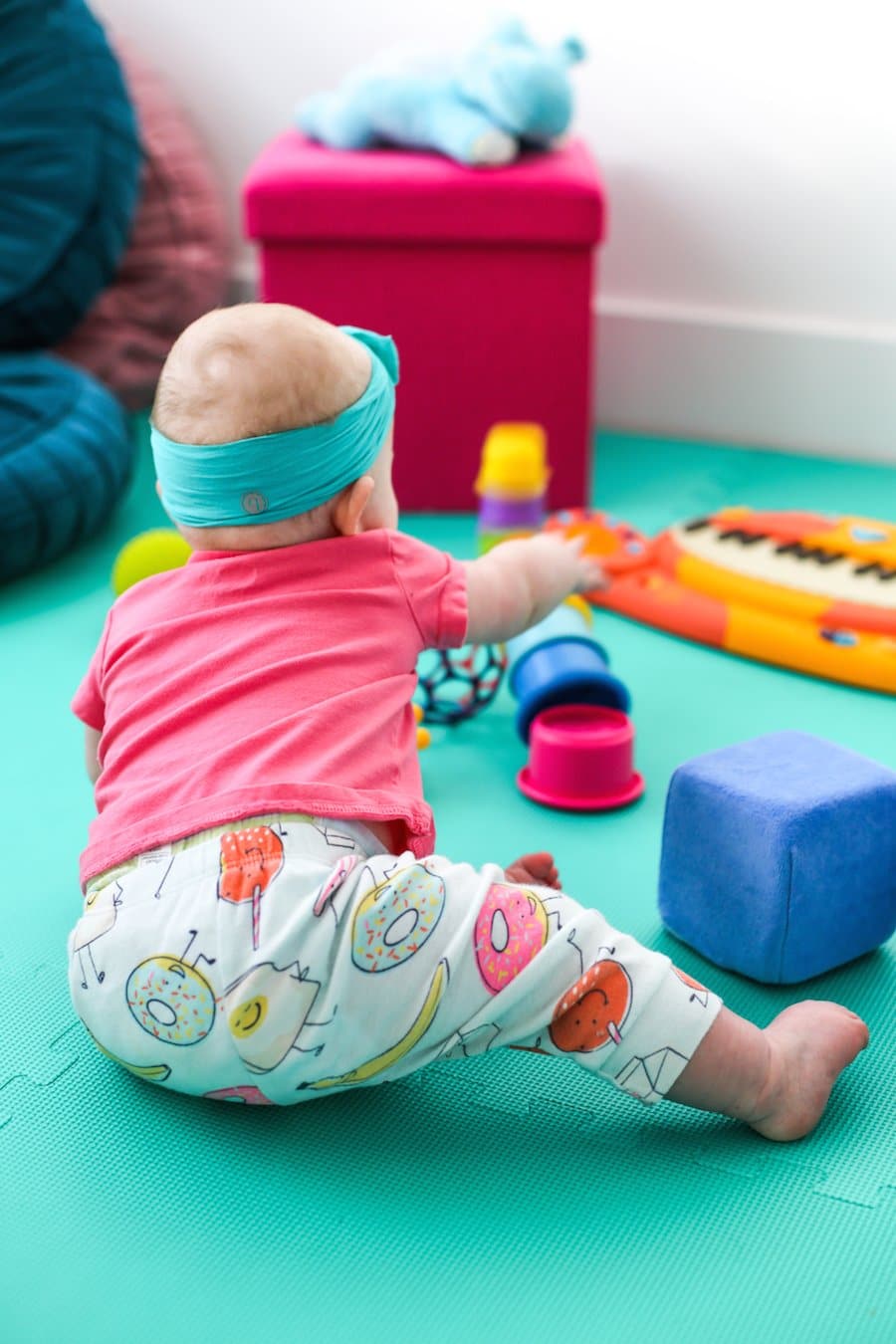 We also read lots and lots of books! The babies have an extensive library of books! They have a few favorites that are read daily (or recited daily because I now know them by heart) and this shapes book is Hank’s new favorite. Other favorite books at the moment are books with pictures of baby faces and books with silly words or sounds. 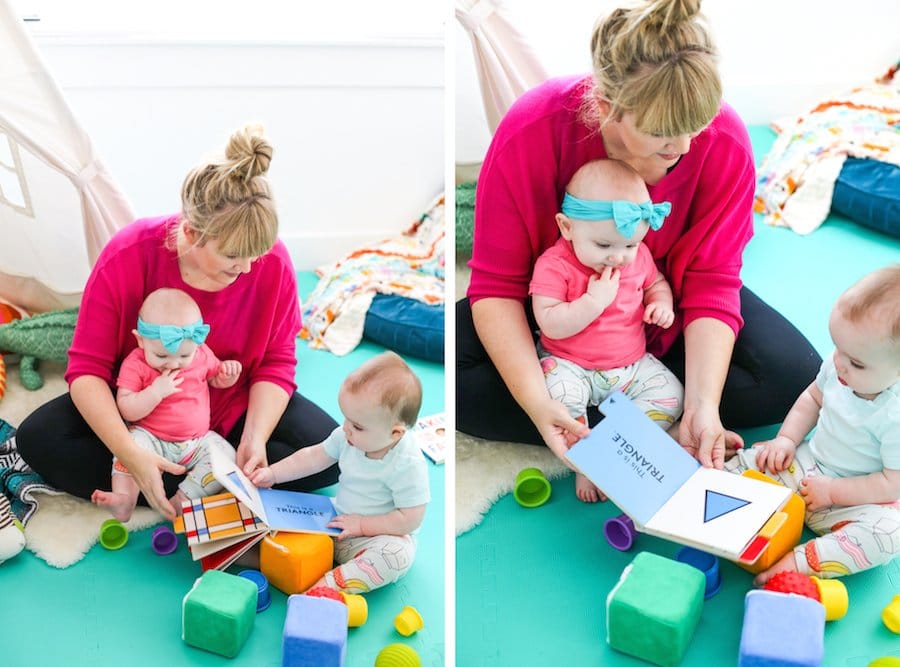 I was taught in my Mommy & Me class to read to the babies while facing them (with the exception of a bedtime book) so they can see my lips and mouth move as I say the words in order to help with their language development, so I try my best to do that, but I’m not going to put Wren down if she crawls into my lap!

Speaking of crawling, we also let the babies crawl around and explore while supervised. They love investigating new parts of the house and they are pulling up on anything and everything in order to stand.

There’s a mirror in their “Safe Baby Play Space” and we love to look in the mirror, make silly faces, and point out the different parts of their faces and say “ear, nose, mouth, eyes,” etc.

They have a few squeaky toys that I’ll show them and squeak, then I’ll hide it behind my back or under a blanket or cushion and ask them to find it.

They have a few musical toys in their play space including a toy piano and they love “playing” the piano, pushing all the different buttons, and making the toys play songs. Hank recently started “sit-down dancing” whenever a song comes on and it’s so cute to watch him bop back and forth to the music.

My husband has a banjo and when he plays with the babies, he will often bring the banjo and let them play with the strings and touch it. We’re hoping that by introducing them to instruments, they won’t be scared to touch them as they get older and will be interested in playing an instrument. We also let them bang on the piano and we will be getting them a couple of ukuleles for their birthday. Their Nana is also promising a drum for Christmas … we’ll see about that one! Ha!

The babies also love taking things out of containers and putting them back in, so I figured I would make use of the Enfamil NeuroPro™ formula tub when we were done using it and I put a few of the babies’ toys inside to rattle around and make noise and then gave them the “new toy” to play with. Note: I supervised their playtime with the Enfamil NeuroPro™ formula tub the entire time since it is not made to be a baby toy. 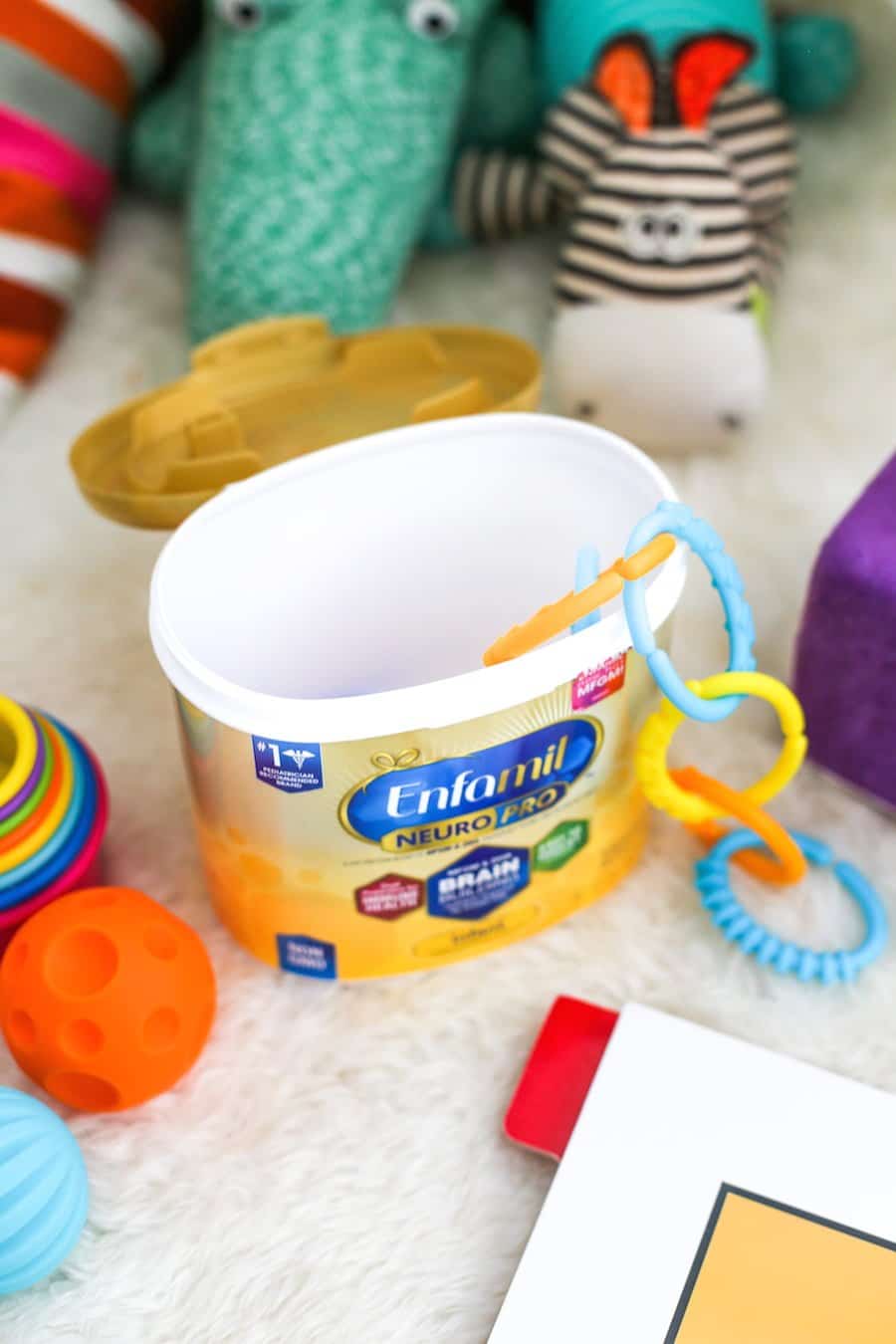 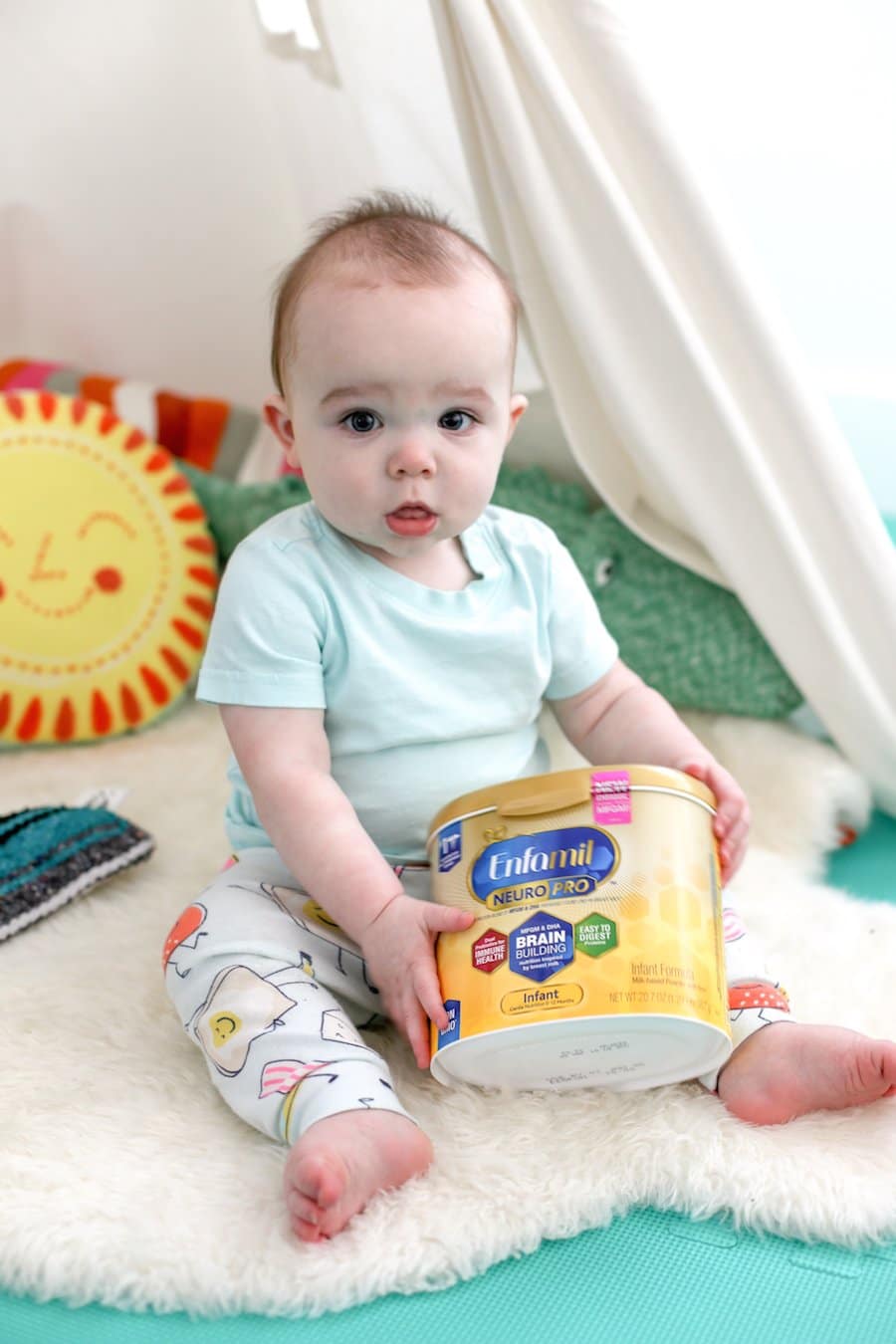 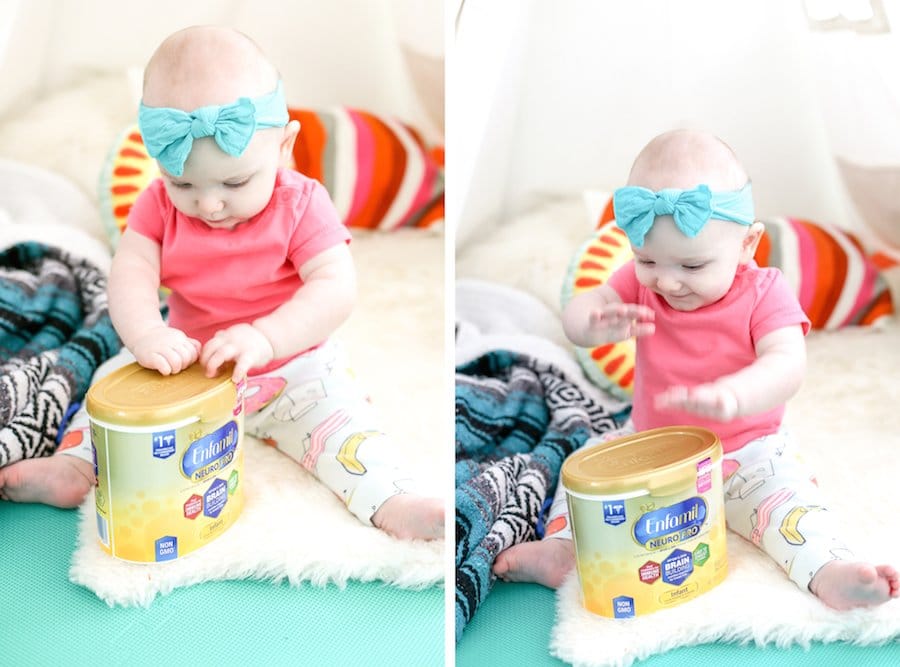 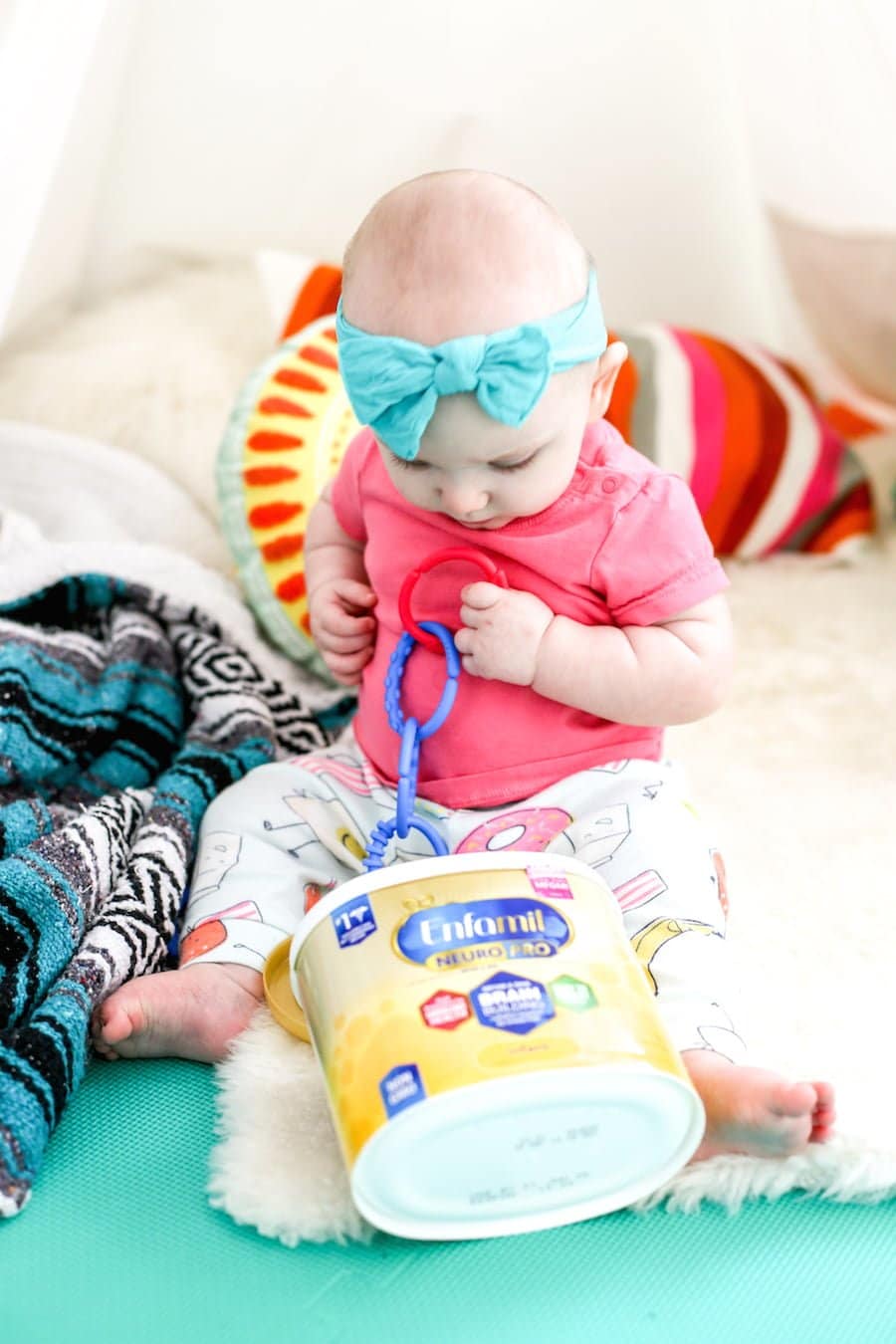 They had such a fun time banging on the tub like it was a drum, trying to figure out how to open it, and then pulling everything out! It’s so funny how it’s always the “box” that is the best toy! 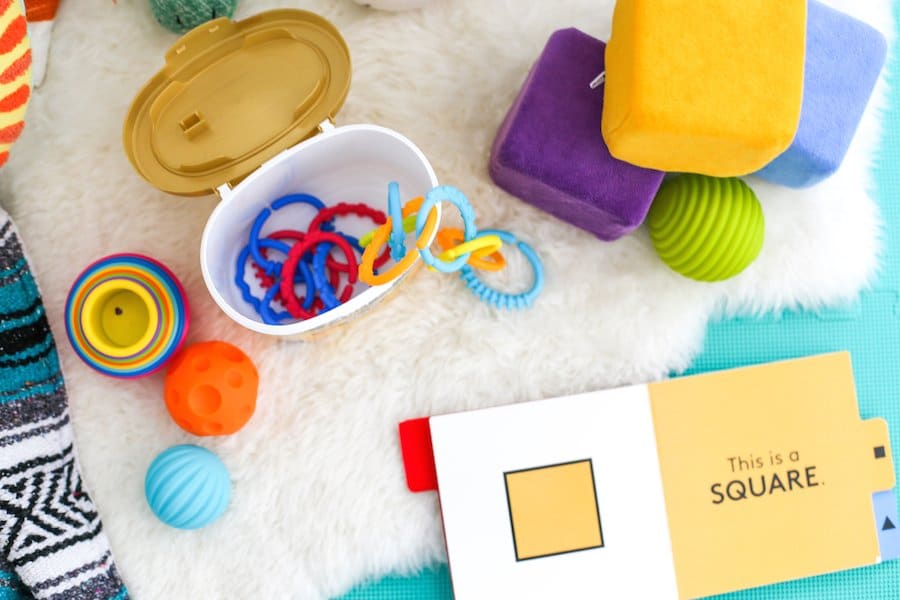 Quick note: please don’t think that we are obsessed with “teaching” the babies based on this blog post and the examples above. We simply play with them, read to them, and play music with them. If they lose interest in something, we move on to something else. We don’t force them to read books or play music. We also don’t spend every second with them – they play by themselves in their baby-proofed nursery or their safe baby play space while I’m doing laundry, dishes, or prepping food.

Also, motherhood and fatherhood isn’t easy and no mother or father is perfect, but whether you breastfeed or formula feed, co-sleep or put your baby in a crib, cloth diaper or use disposables, as long as you’re doing the best you can, then you’re an amazing mom or dad, and you’re doing a great job!

What games do you play with your baby? What’s your baby’s favorite book? Let me know in a comment below – I’m always looking for new ways to entertain these two! 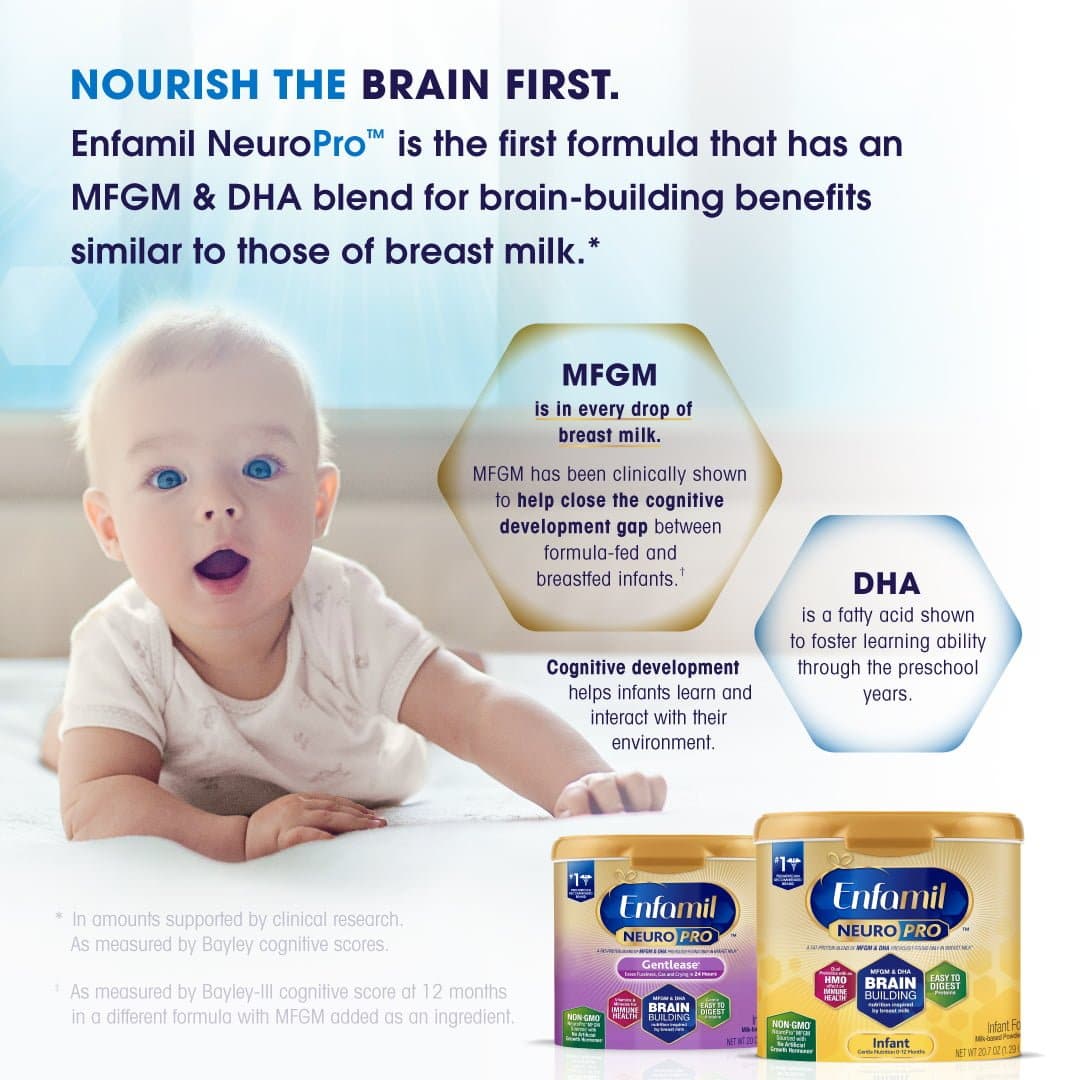 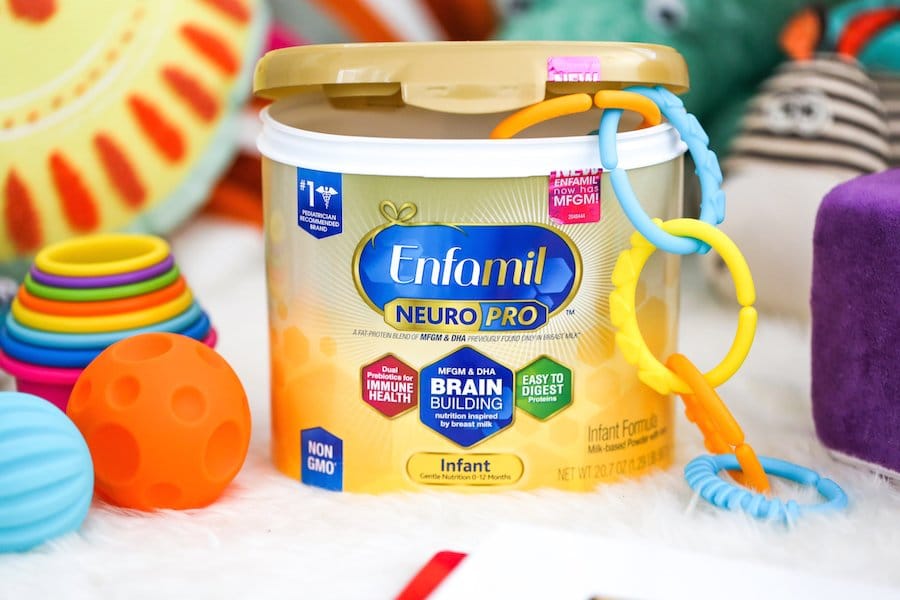 *In amounts supported by clinical research. As measured by Bayley cognitive scores.

**As measured by Bayley-III cognitive score at 12 months in a different formula with MFGM added as an ingredient. 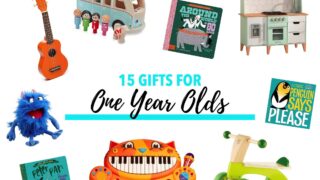 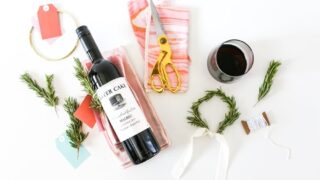 Next →
A Perfect Hostess Gift!