Disclosure: I received paint in the lovely shade of Rosy Outlook from Sherwin-Williams to paint my pumpkin table and stool. All views and opinions are mine alone and no other compensation was provided.

Sometimes you really want to just carve into that pumpkin and start decorating, but if you start too early, that pumpkin is just going to rot and mold and get gross before Halloween even arrives. So I have an alternative! A DIY Succulent Pumpkin! 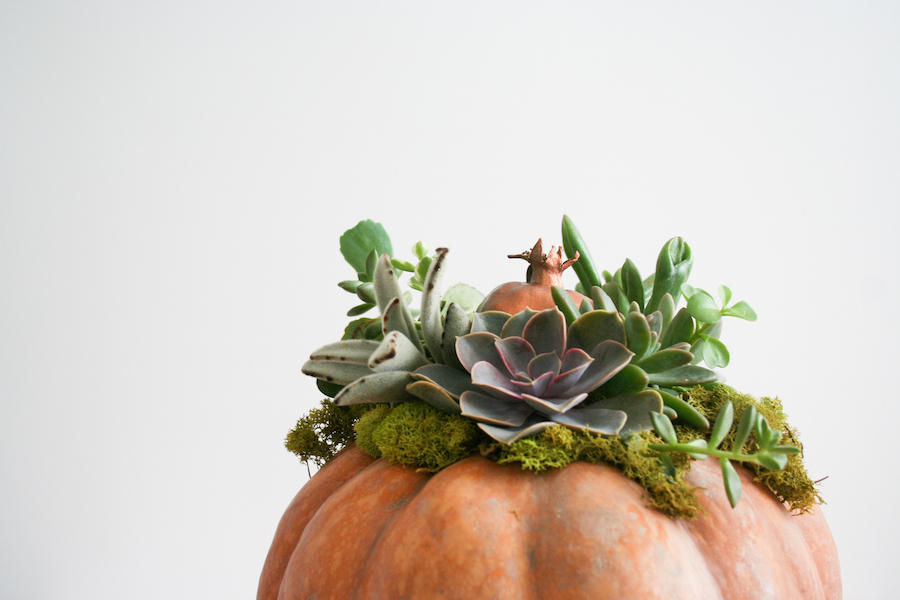 These beauties can sell for over $100 at some stores, but you can make one yourself for about $30 or less. I say or less because if you already have the succulents growing outside, you can just use your own clippings and won’t have to buy any/as many plants. 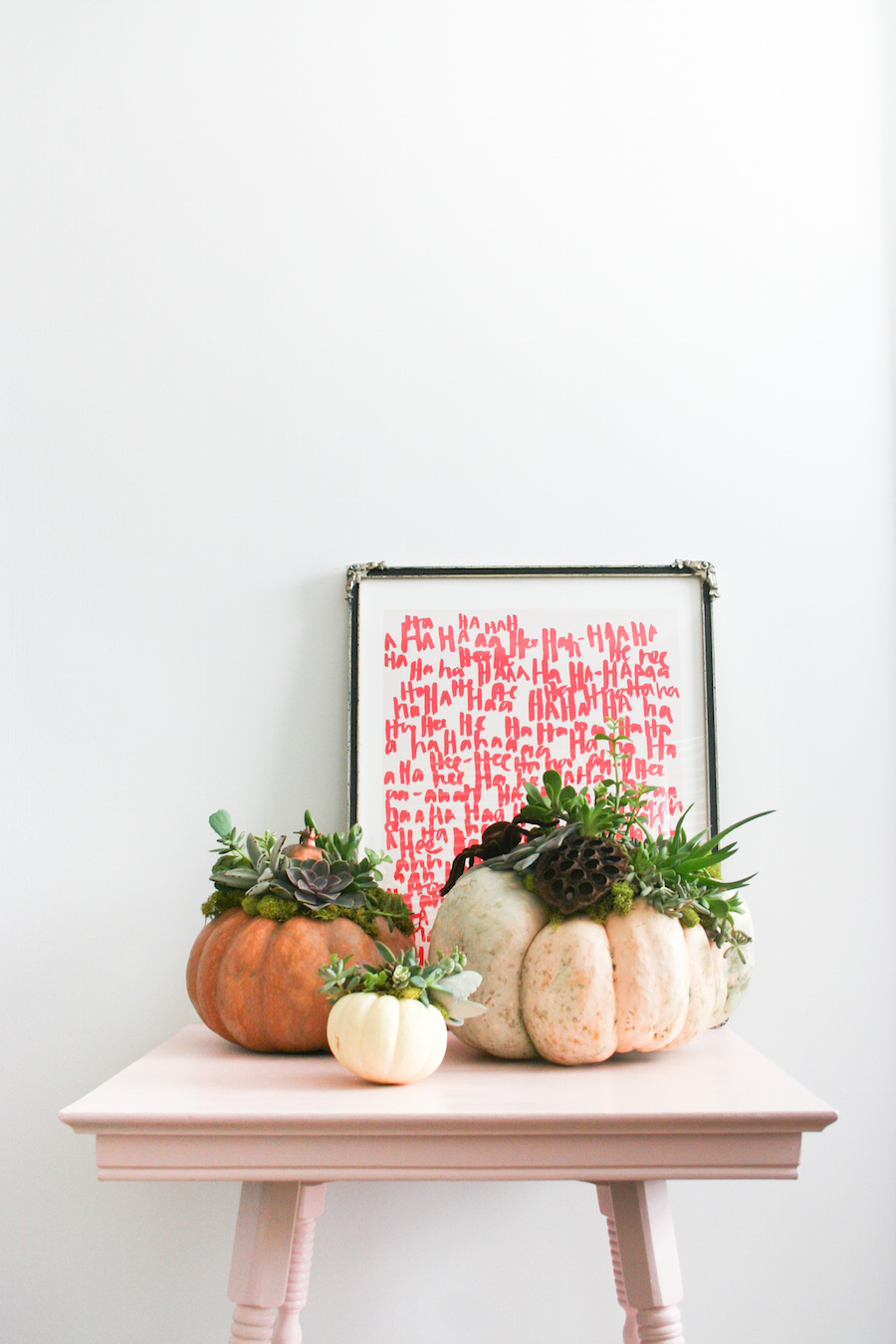 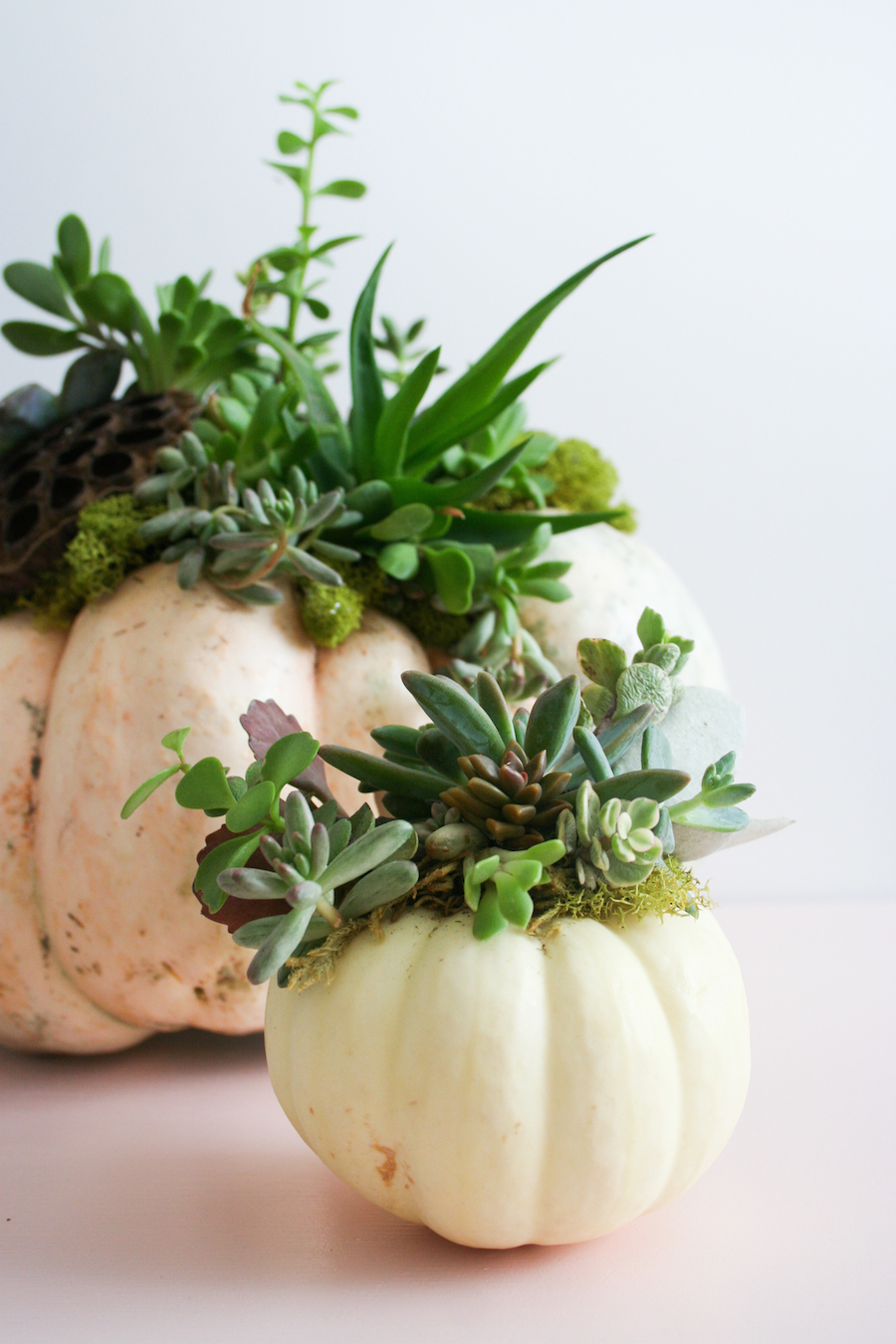 A Succulent Pumpkin is a great fall-themed decoration because you can make it before Halloween, use it for Halloween doorstep decor (hopefully no snot-nosed kids steal and crush it in the street), and then bring it inside for Thanksgiving and use it as a table centerpiece (along with mini place card succulent pumpkins on each plate). After that, keep it on your doorstep and it will stay alive for several months with correct care. 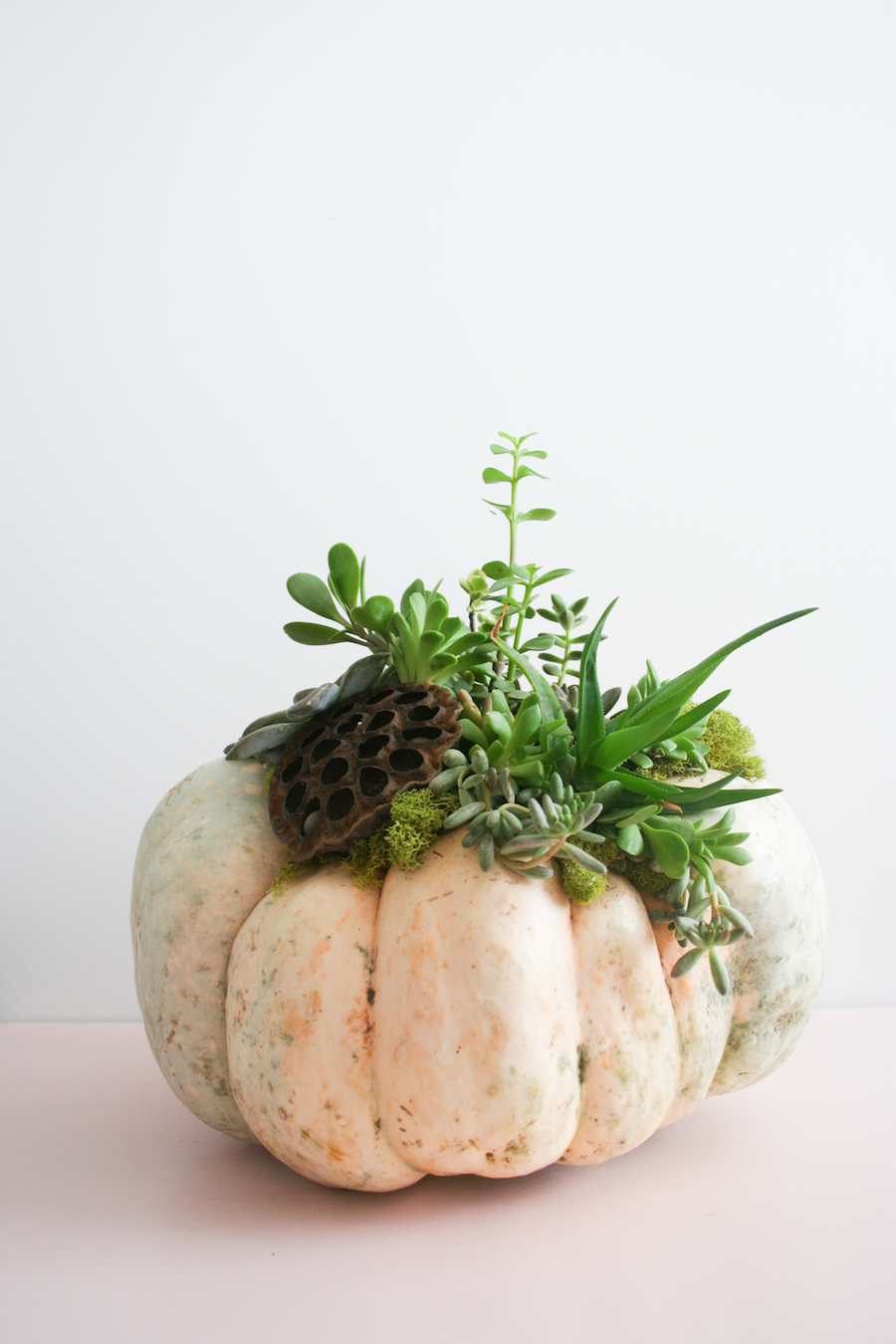 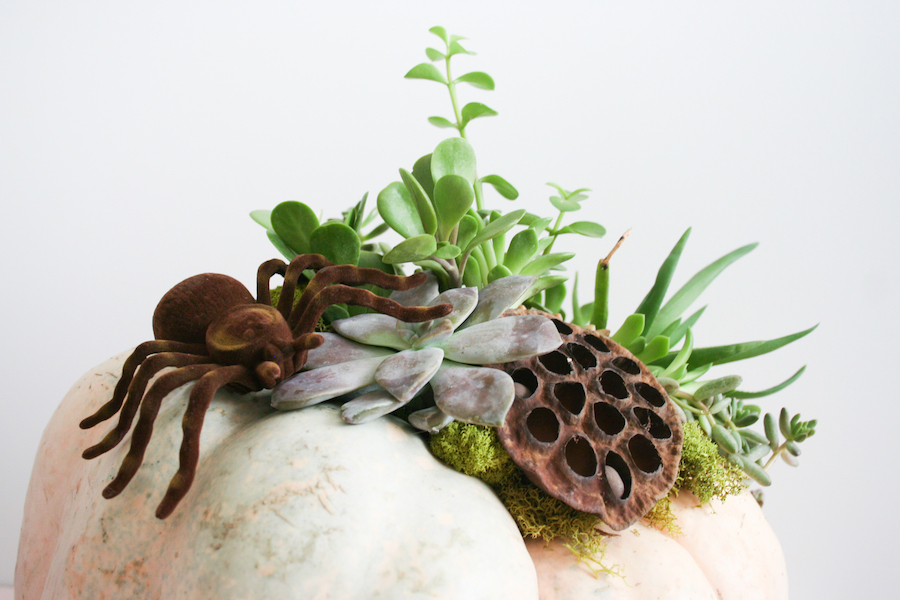 And they are not hard to make – they simply require a bit of time. The small one took me about 15 minutes and the larger one took me about an hour to make. Want to get started? You’re going to need a few supplies. 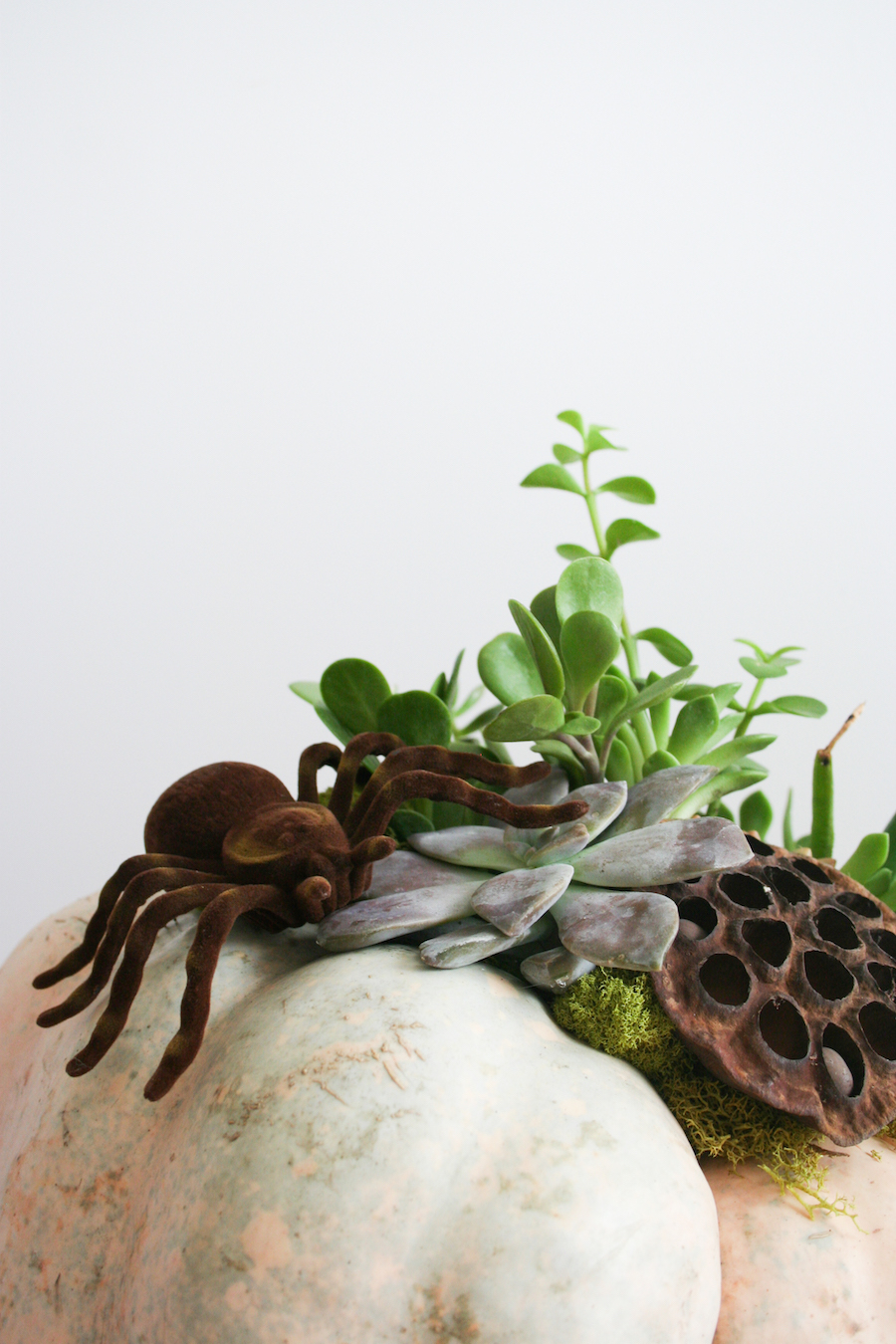 You will need a Cinderella pumpkin which has a flatter top – you’re going to need the flatter surface to place all the succulents because the pumpkin does NOT get carved! See? No carved pumpkin means it lasts longer! You will also need some green moss. I used two kinds, a cheaper filler moss that wouldn’t show as much and a fancier (read: more expensive) bright green moss for the edges. You need both tacky glue and a hot glue gun. And last, but not least, succulents, seed pods, pomegranates, spiders, or other decorations. 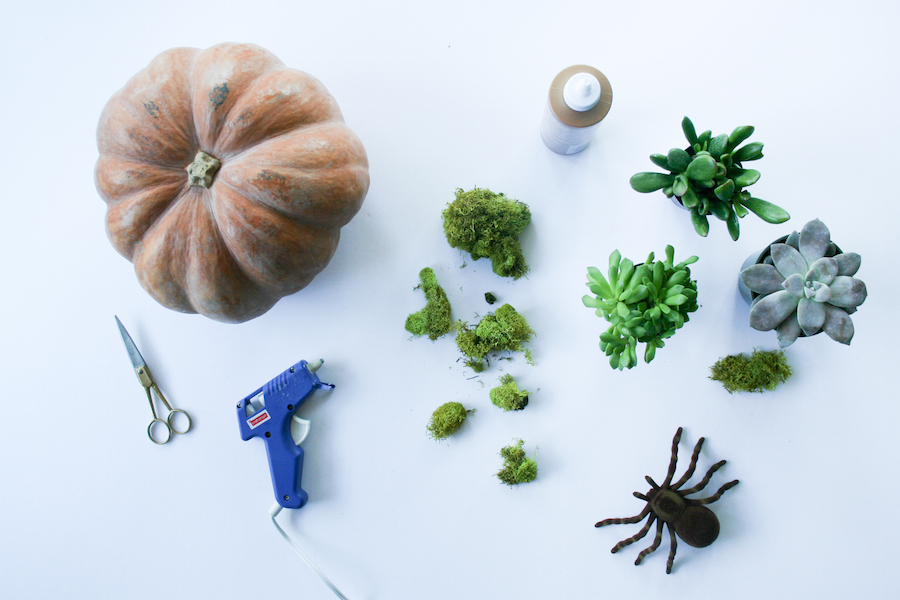 First, cover the top of your pumpkin with tacky glue. We use tacky glue because we don’t want to hurt the pumpkin – remember, the better and healthier the pumpkin, the longer it lasts! Then start tacking down some moss. 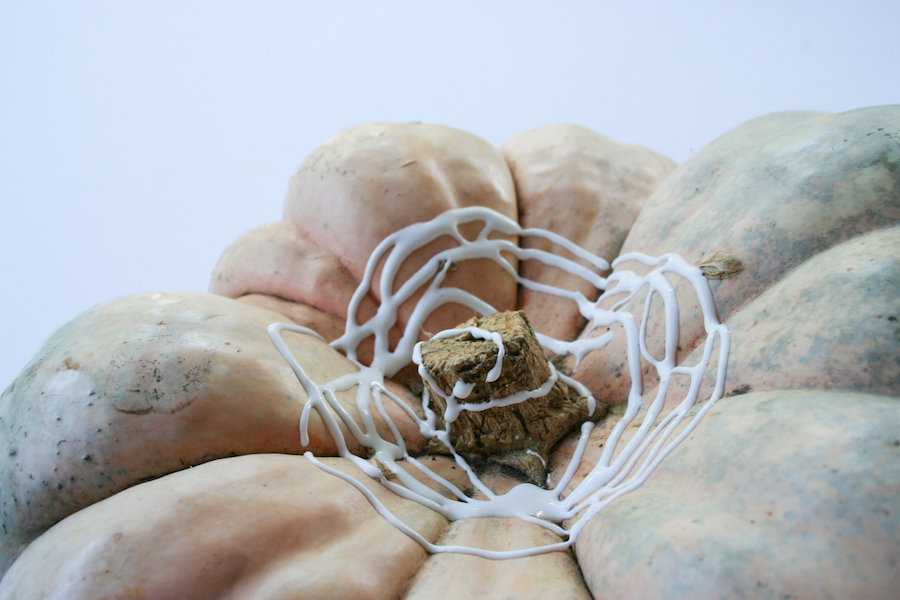 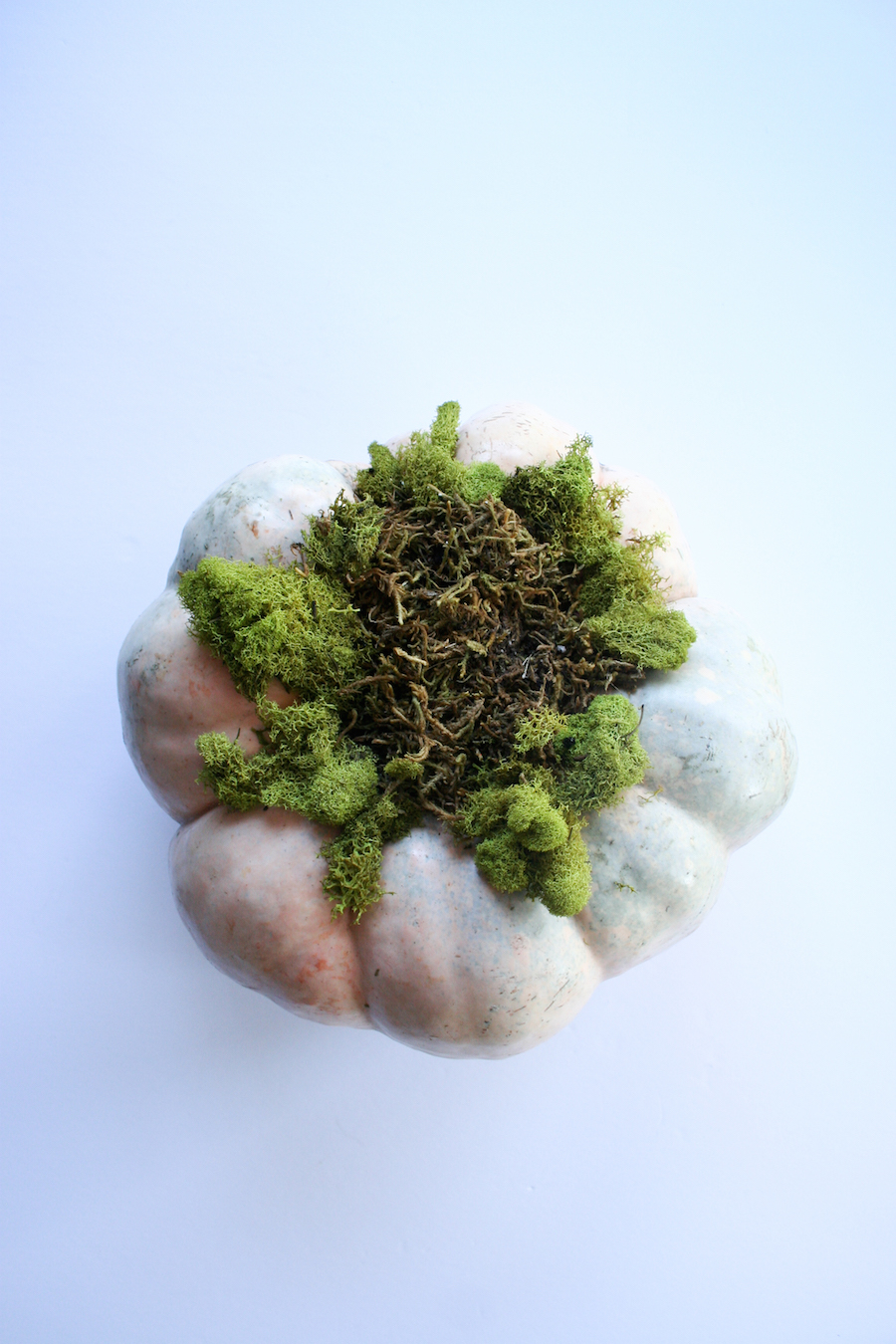 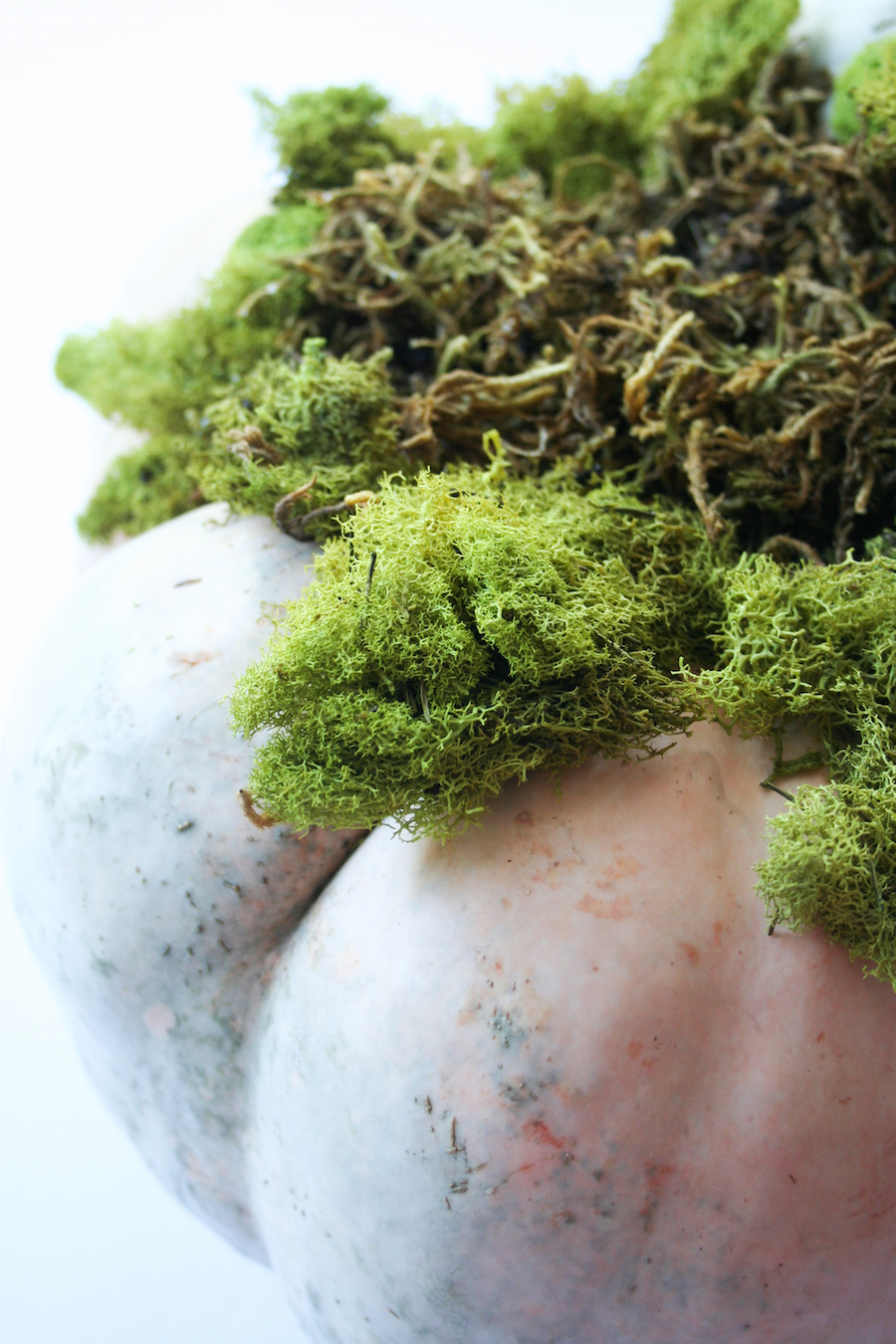 Next, prep your succulents by removing them from their plastic pots, removing the dirt, and cutting them down to about a 1/4 inch of the root. Then, hot glue your largest succulent or decorative piece to the top of the pumpkin, slightly off center. And then keep hot gluing more succulents and decorative pieces (like pods or spiders) to your moss-covered pumpkin top until the top is full. Be sure not to put hot glue where you clipped or cut the succulent so it can grow new roots, but instead glue around the raw edge or glue the flat underside of the leaves. 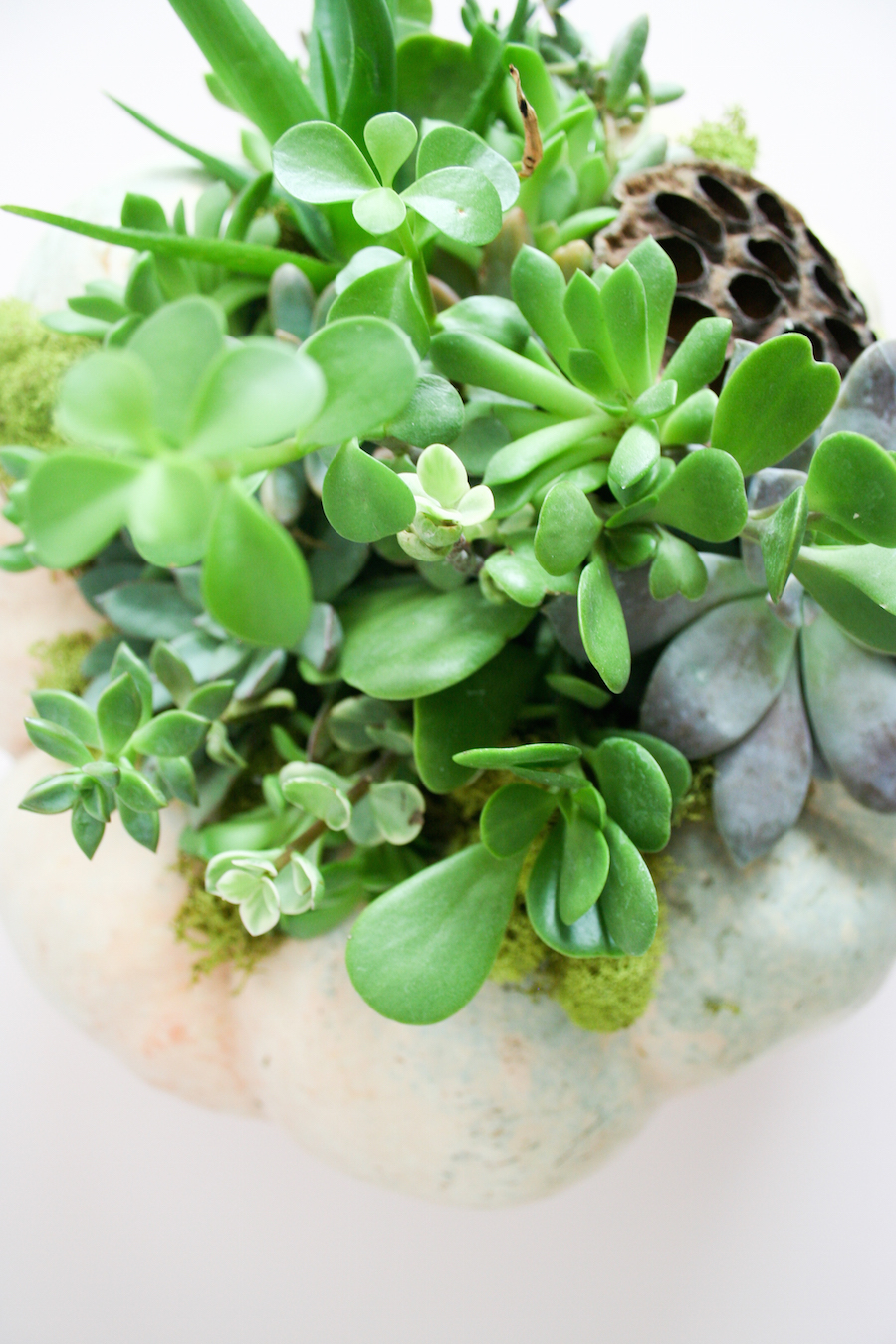 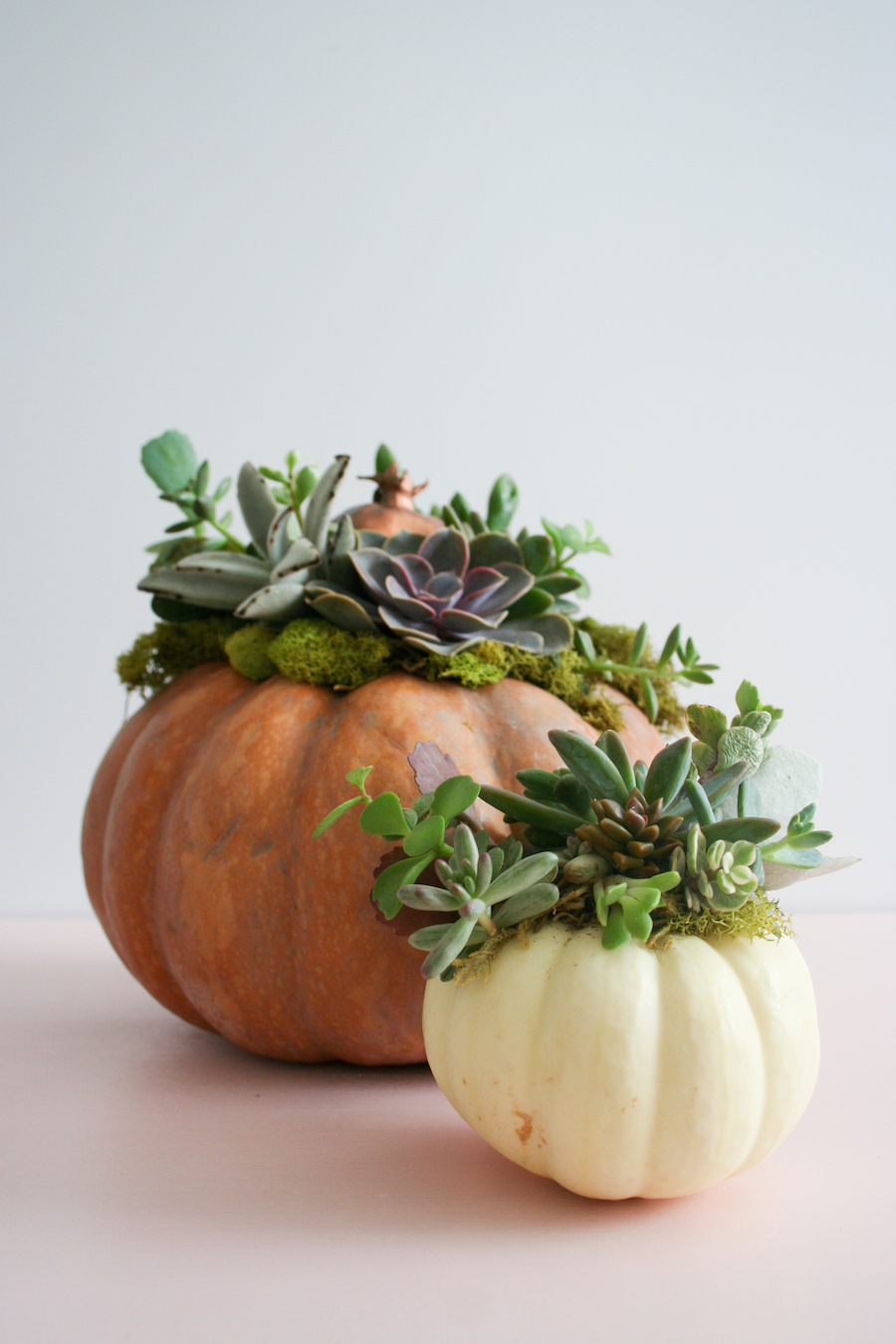 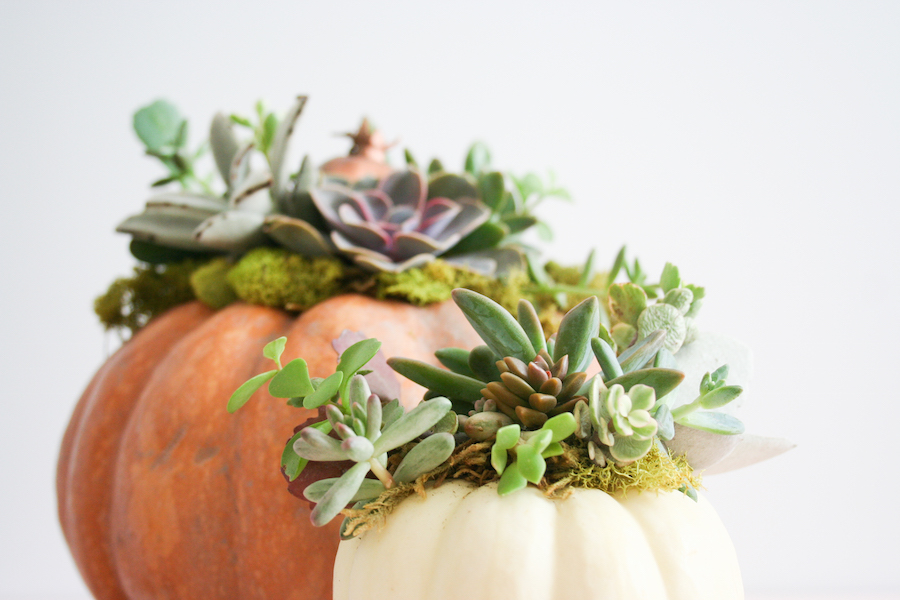 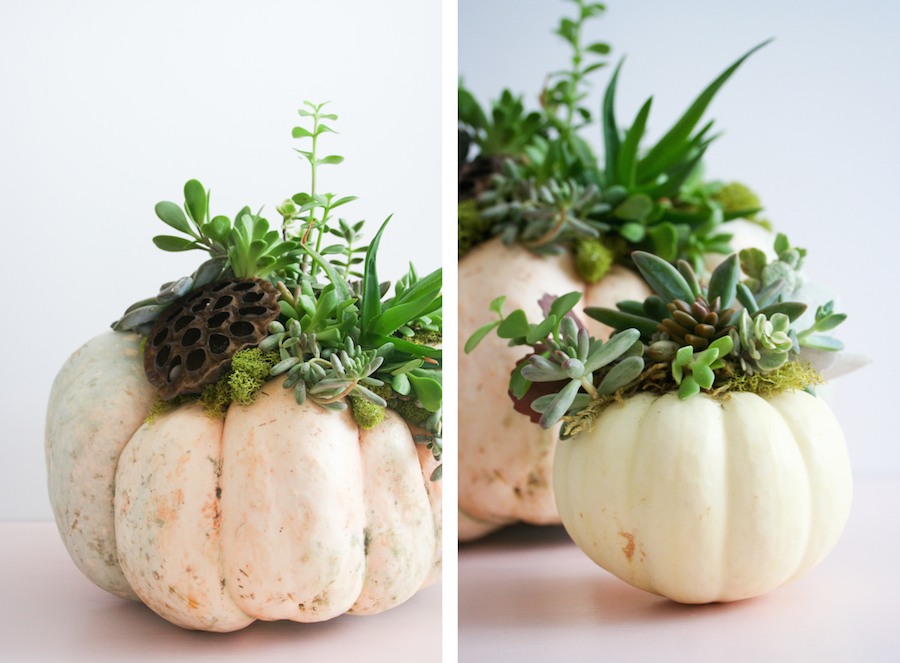 Now, can we talk about my adorable little pink table and stool? The stool was about $4 from a thrift shop and I purchased the beautiful spindle-legged side table at the flea market for a steal!  I had originally purchased it for a styled wedding shoot where it would be the perfect table for a mini-cake. Fortunately, it wasn’t photographed from above because the table’s top is worn and scratched. But after the shoot, I had to do something with the table and there wasn’t much to be done with it with that messed up top, so I knew I had to paint it! And isn’t that just the dreamiest shade of pink? It’s Sherwin-Williams’ Rosy Outlook. With such an optimistic name, you can’t go wrong. 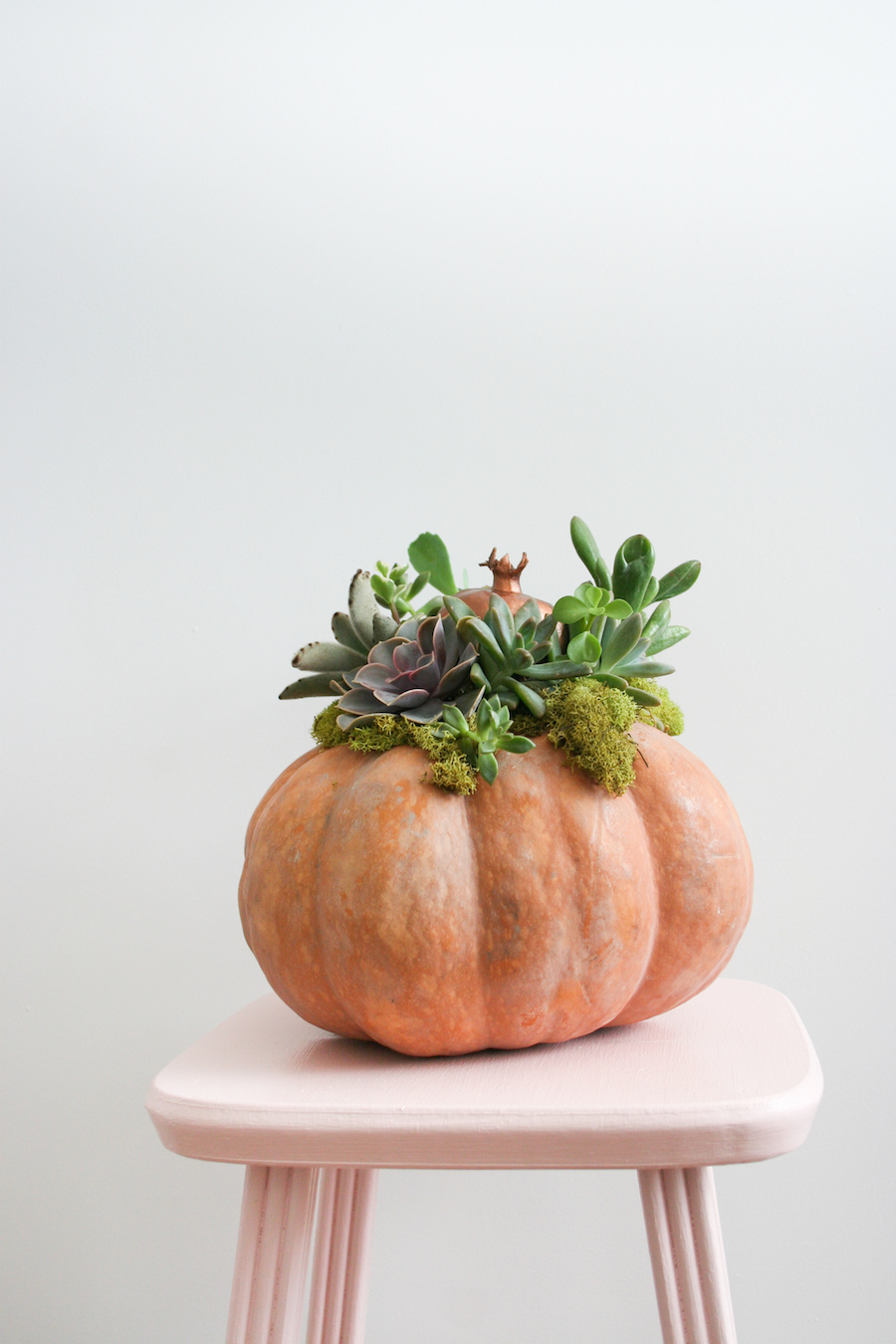 And don’t my pumpkins look awesome on that shade of pink? If pink doesn’t work for you, be sure to visit Sherwin-Williams.com 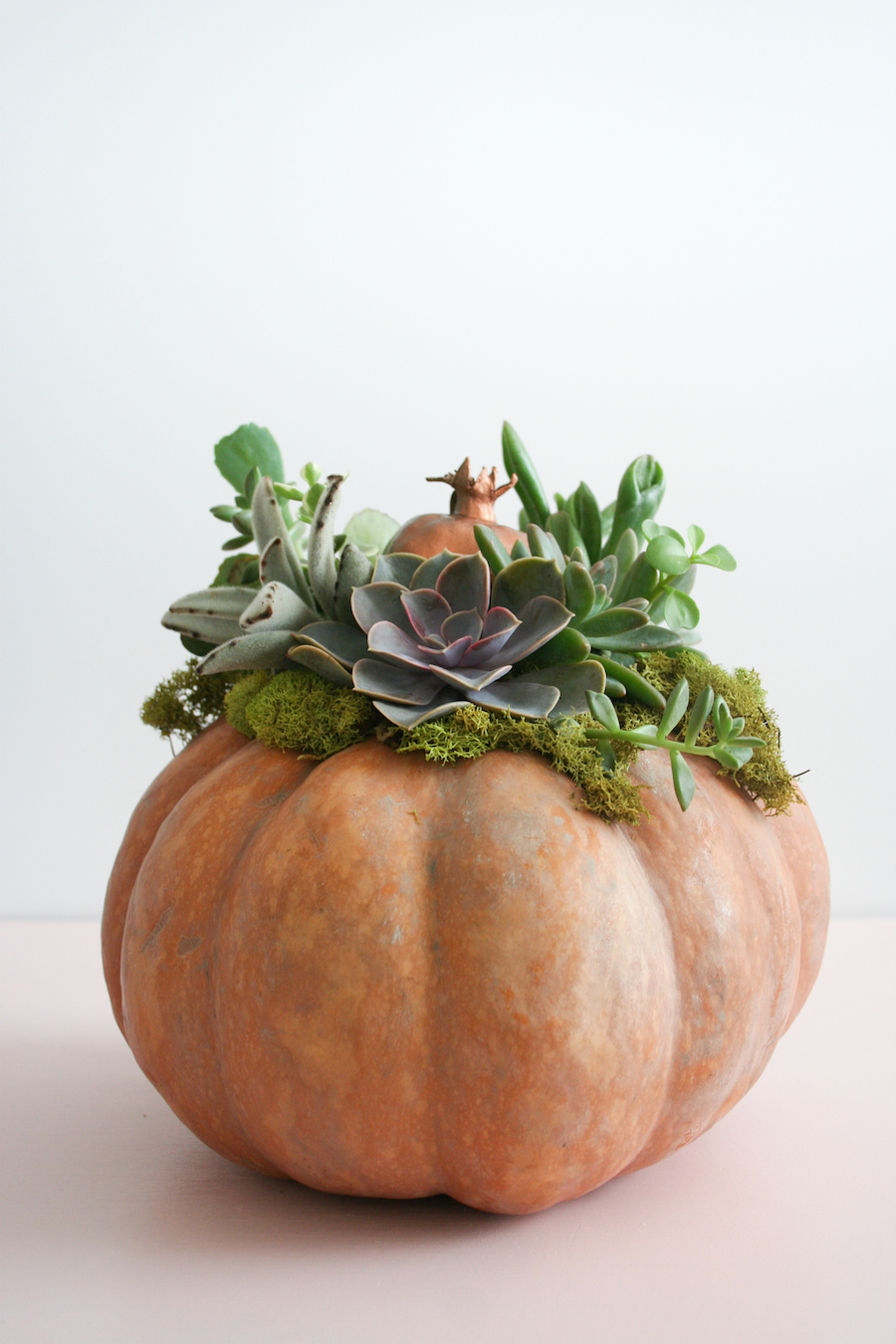 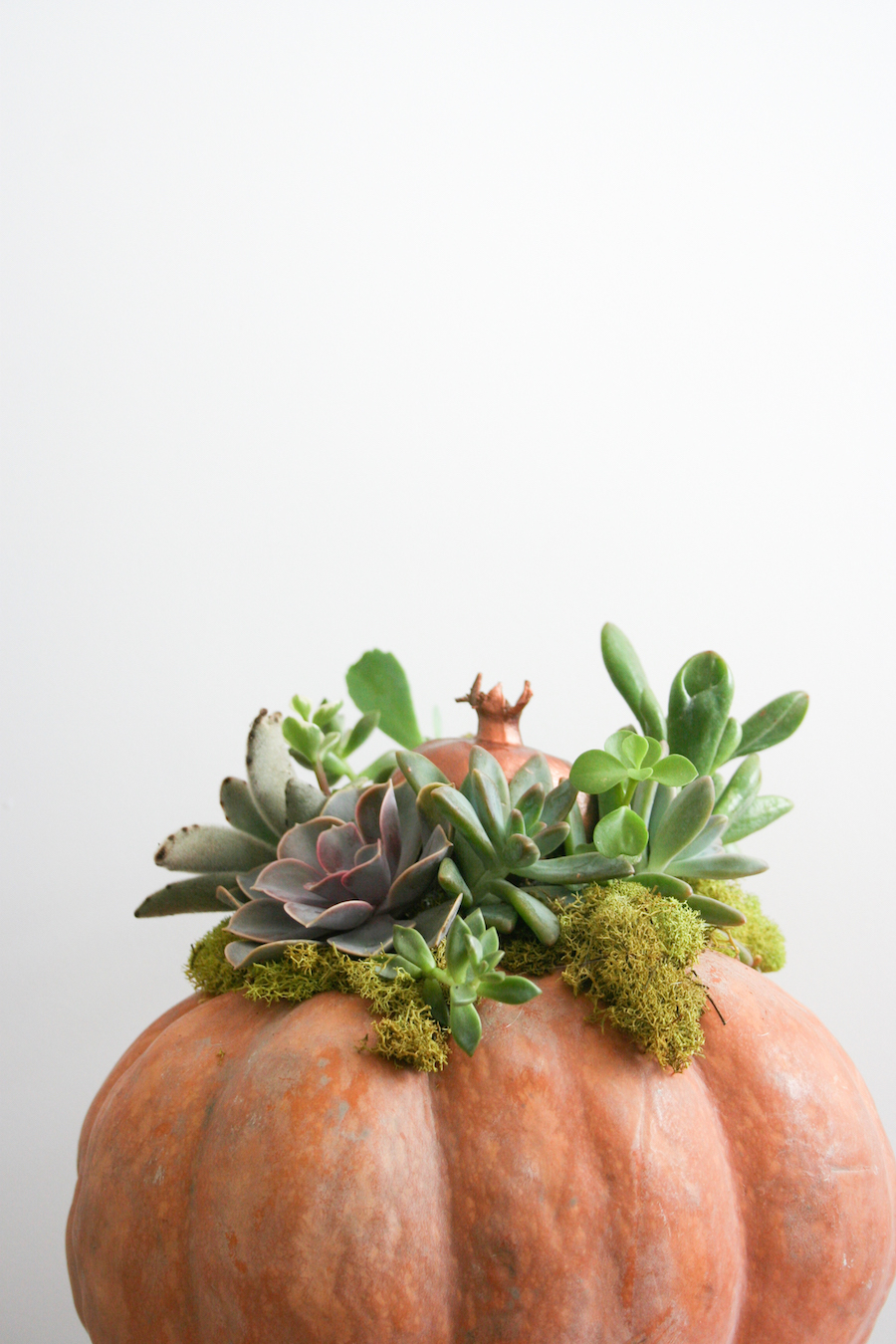 And if you happen to make a succulent pumpkin for Halloween, be sure to take a photo and tag me so I can see! 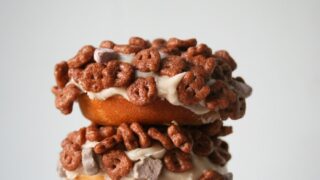