So, sometimes life with twins can be a bit hectic and last year I didn’t get Hank and Wren’s Twin Baby Luke & Leia Star Wars Halloween Costumes finished and photographed until just before Christmas, so obviously I didn’t get to share their Halloween costumes on time and instead just waited until Star Wars Day (May the 4th.) But, I figured, better late than never, especially since I’ve had some questions on Instagram as to where I got the costumes. I made them! But don’t worry – it’s more “made them” as in sourcing and putting them together with a little glue gunning than it is a crafty or sewing costume! You can “make” them, too! I promise!

Omigosh! I can’t believe how small they were!

Just an FYI for reference, the babies were 11 months old when we did these photos so you can figure out sizing below.

Here are the details for the Luke costume:

The smallest karate uniform (size 0000) I could find for the top (and I used the belt that came with it for both their belts, more details below). My only regret is that I wish I had covered the uniform’s patch with white fabric (because a seam ripper wouldn’t have taken it out, it was sewn too tightly). I told myself I would photoshop the patch out, but there’s only so much time in a day.

Brown Pants – I can’t find the exact ones I got for Hank, but these are similar and I’ll likely get a larger size of these ones for Hank for this year!

Brown Mocs – they wear these mocs all the time! So it’s not just for the Halloween costume!

Blue Light Saber – I highly recommend this Etsy seller! She was so nice, did a custom color for Wren, and sent so many extras!

Belt: Ok, so the belt is where you need to get a little crafty. Don’t worry, it’s just glue gun crafty because I can’t sew for shit! For Luke’s belt, I cut the karate belt that came with his shirt (link above) in half (save the other half for Leia’s belt). I then covered it with the cheapest brown fabric I could find at Joann (don’t forget to use the app coupon!) I then glued a little brown square as a “bag” to the belt as well as a couple of silver lame fabric “accents.”

And here are the details for the Princess Leia costume:

Girls’ white turtleneck – I ordered a size 4T so it would fit like a dress.

Brown Mocs – As I said above, they wear these mocs all the time, so it’s not just for the Halloween costume. And Wren often gets her brother’s hand me downs because he has some BIG feet! You could also do the silver mocs and they would be so cute!!

Pink Light Saber – I highly recommend this Etsy seller! She was so nice, did a custom color for Wren, and sent so many extras!

Belt: I used the other half of the karate belt that I cut up for Luke’s belt and just covered it (using my glue gun) with silver lame fabric from Joann (again, don’t forget to use the app coupon and you might want to source the fabric online to make sure it’s in-stock at a store near you or you can possibly order it online here).

I’m not even a huge Star Wars fan and part of me wants to dress them up as Luke and Leia every year!! Most of the costume parts will still fit them again this year, I just need to get both of them larger pants and Wren probably needs new shoes.

And here they are with …. their father.

And, just to prove it was actually Christmas when we finally did “Halloween,” I made them take photos in front of the Christmas tree.

Let me know if you have any questions and be sure to tag me in any photos if you make Luke & Leia Halloween Costumes for your twins! 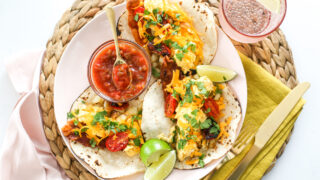 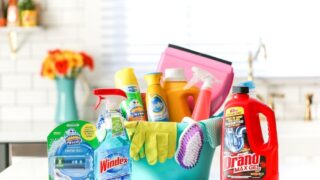 Next →
How to Do a Fall Deep Cleaning Before the Holidays
Click here to cancel reply.

Those Salty Babies are just the cutest!