Big Donut Crawl in Los Angeles and a Test Taste!

Note: A little over 2 years ago I published my first blog post: a Donut Crawl to all of the “Big Donut” donut shops in the Los Angeles area (plus a drive-thru donut), followed up by a blind taste test. The post is now buried in the archives, and thank god because the photos are terrible! I thought about just editing the photos and republishing the post, but I didn’t want to lose that first post with the bad photos because it shows just how far I’ve come. (It also shows how amazing Lightroom and Photoshop are!) So I’ve copied and pasted my words and I’m re-publishing it below with newly edited photos. If you like vintage Los Angeles and big roadside attractions, I recommend taking your own Donut Crawl adventure!

Two weekends ago, the mister and I went off on a local adventure to visit all of the remaining Big Donuts in Los Angeles, plus the drive-thru Donut Hole. And … we had a blind taste test! 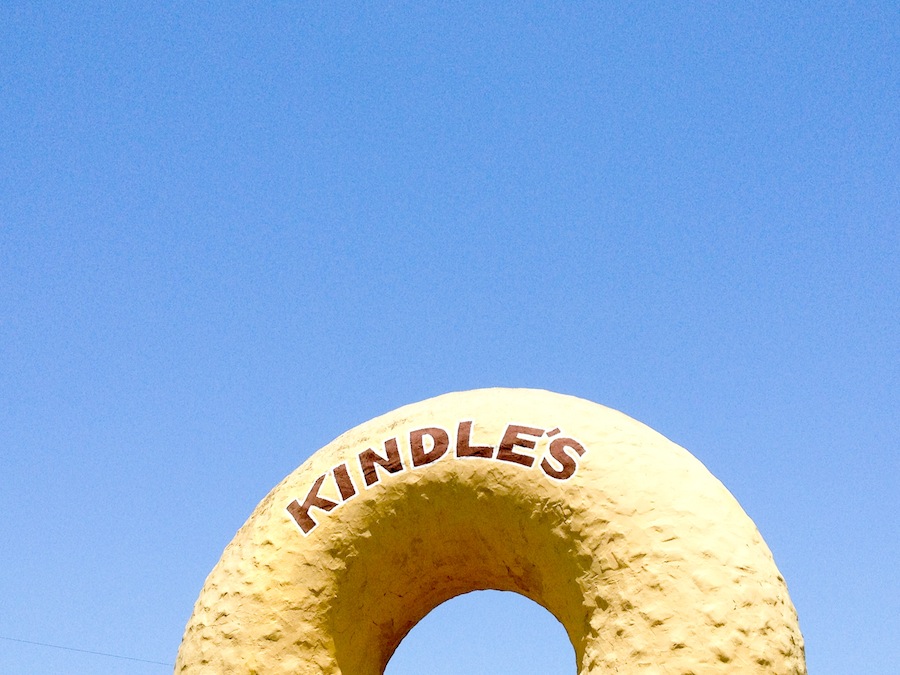 We set off around 10:30 a.m. for Randy’s Donuts, the most iconic of the group, as it has been featured in Mars Attacks!, Iron Man 2, 2012, and Arrested Development. After getting lost (thank you, Apple Maps), we finally arrived and ordered 2 glazed (one now, one for the taste test later), an apple fritter, and some coffee. We shared the one glazed (and deemed it delicious) as well as the apple fritter, thinking that we were pacing ourselves for other donuts at the other locations. 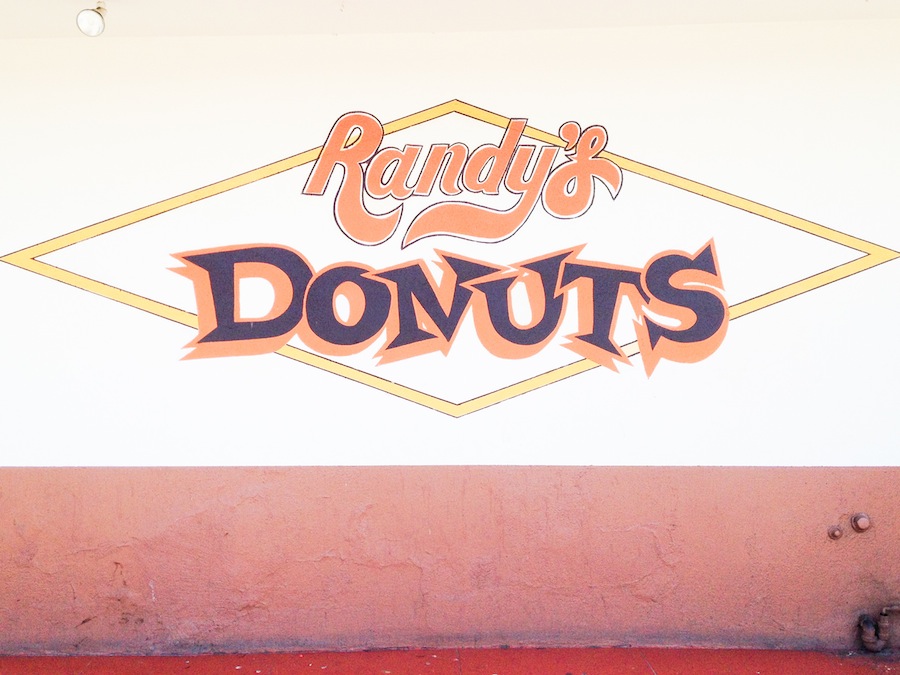 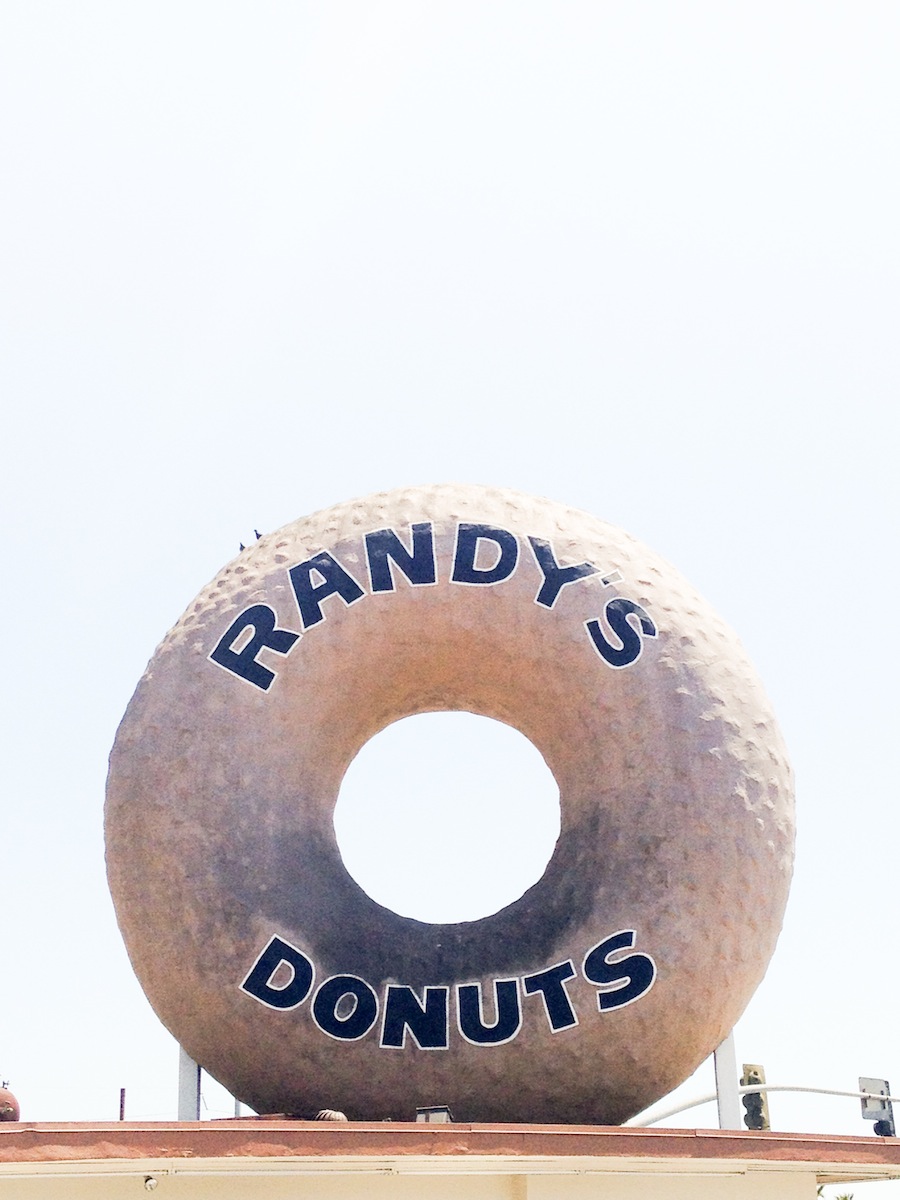 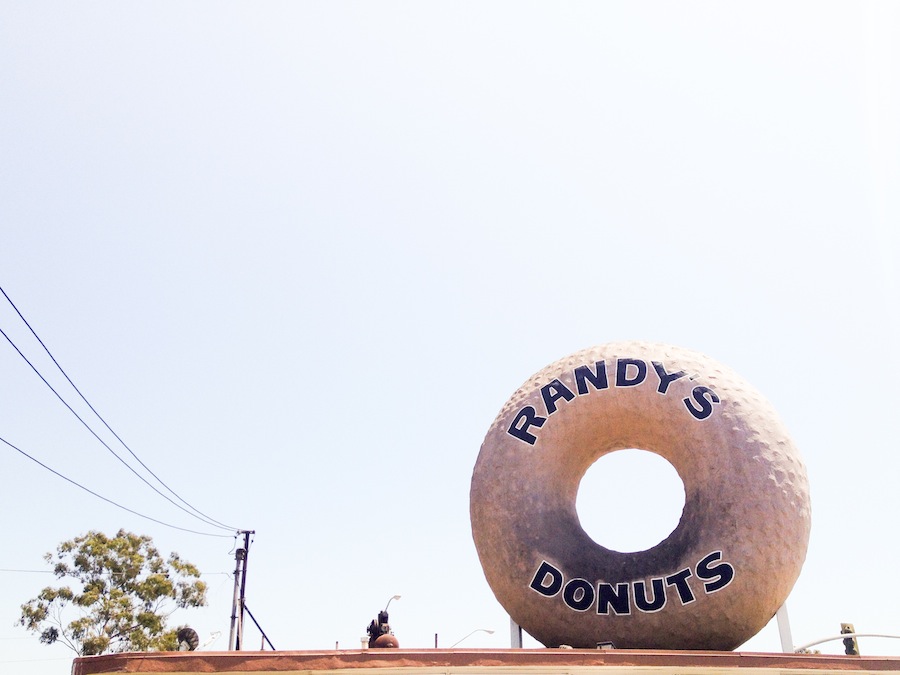 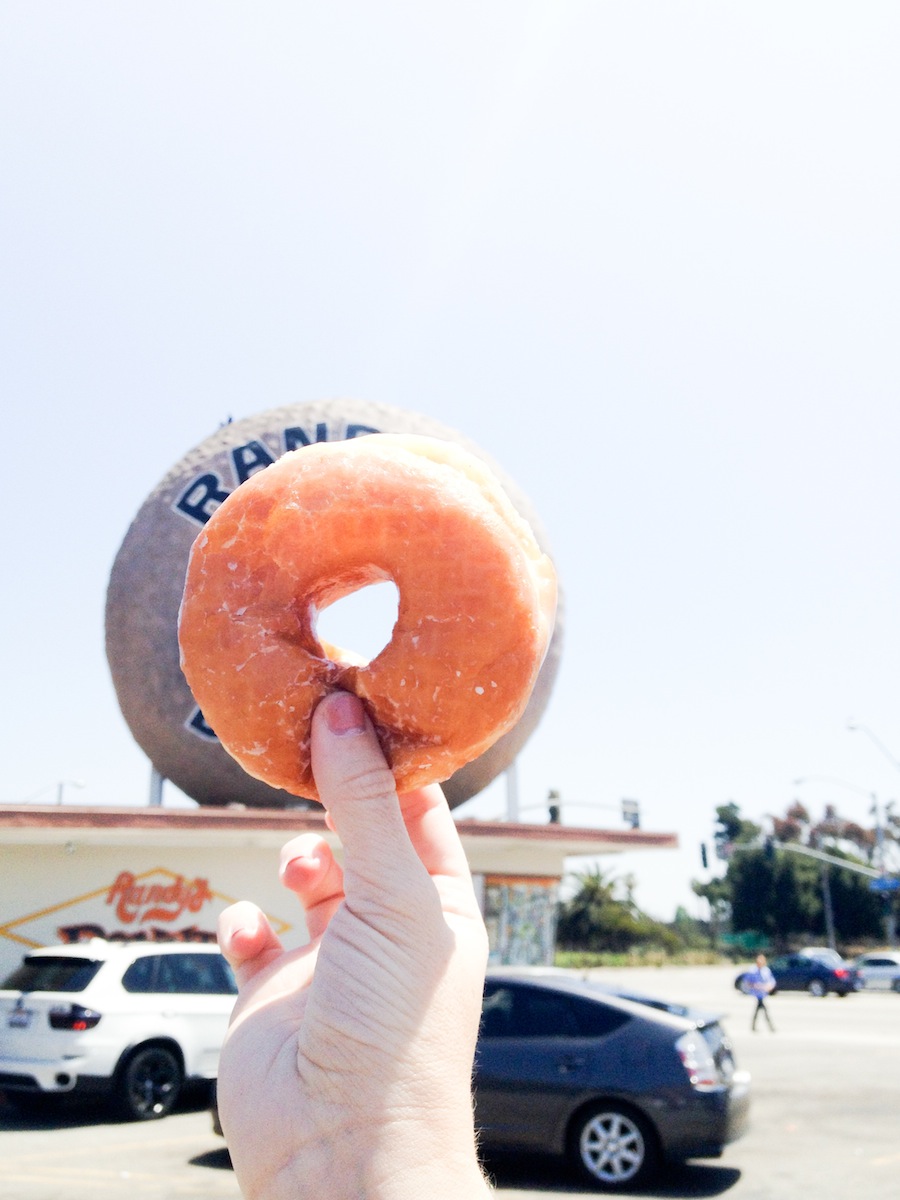 We then set off for Kindle’s Donuts, which is the original location of the Big Donut Drive-In chain. We ordered two glazed (again, one for now, one for later) and split the one glazed between us. 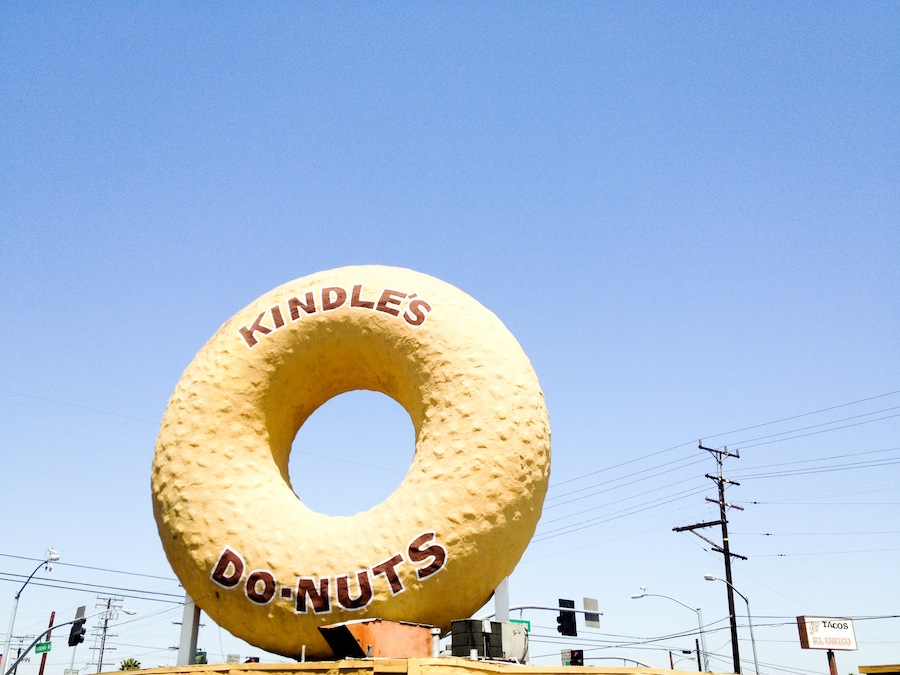 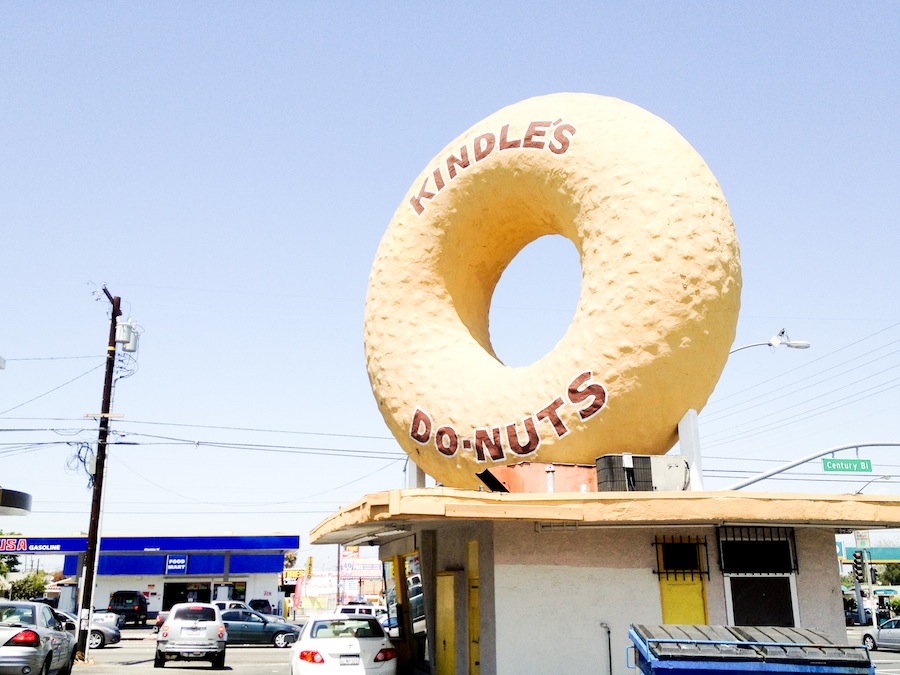 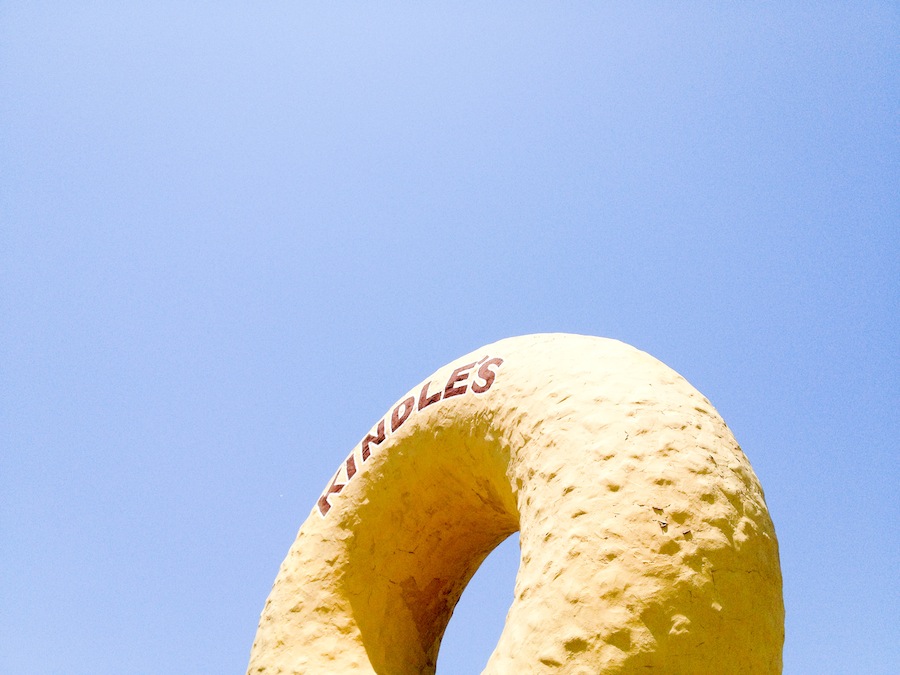 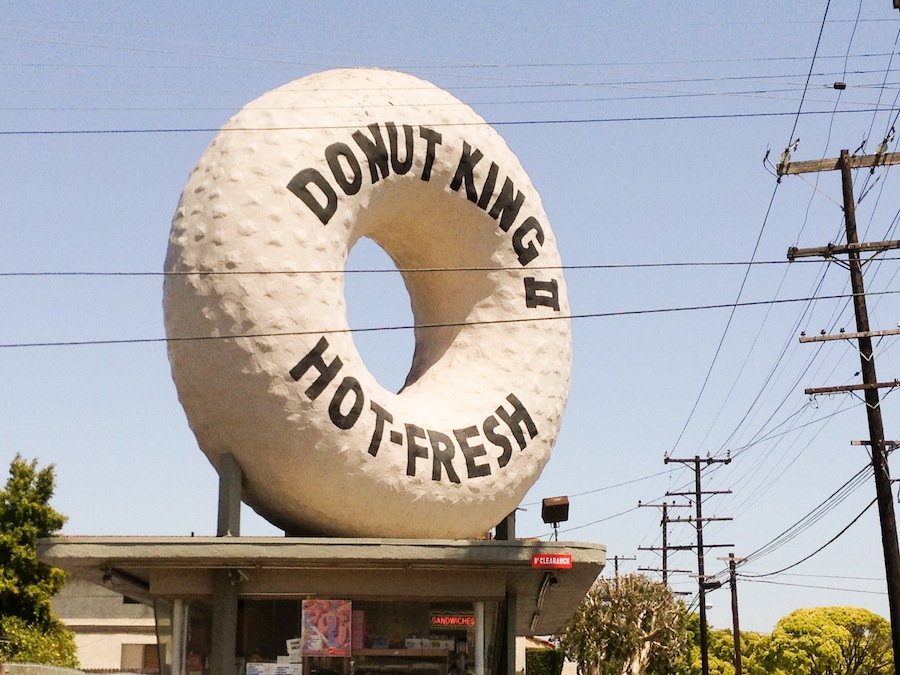 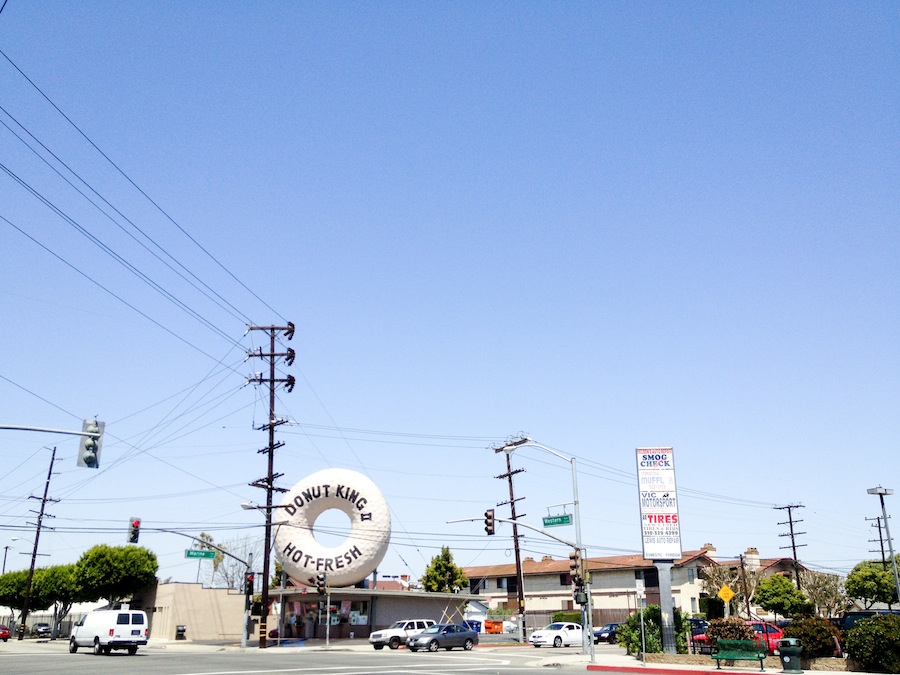 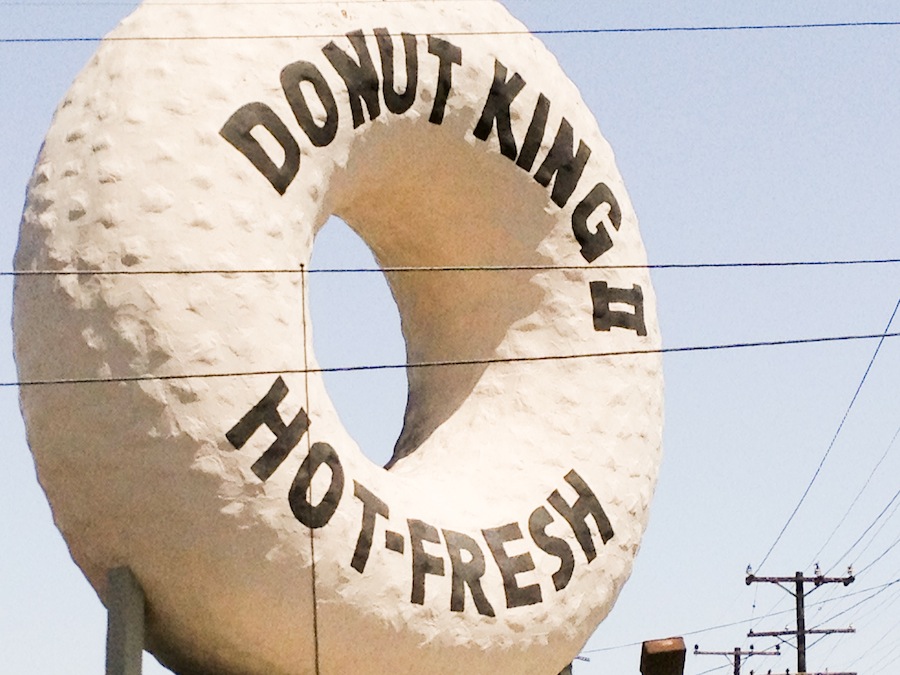 And then we drove to Compton to visit Dale’s Donuts. We took streets and ended up in some back areas of Torrance where another driver in front us actually did a few car donuts in order to make a u-turn. We then got to Dale’s Donuts, but it was closed! Unfortunately Dale’s had very odd hours, so they were not included in the taste test. 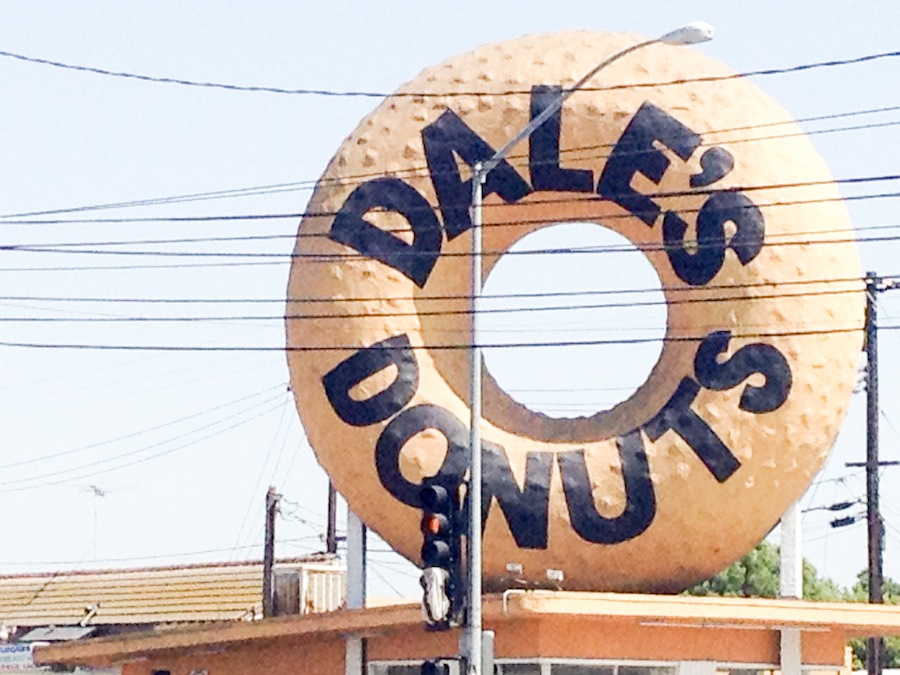 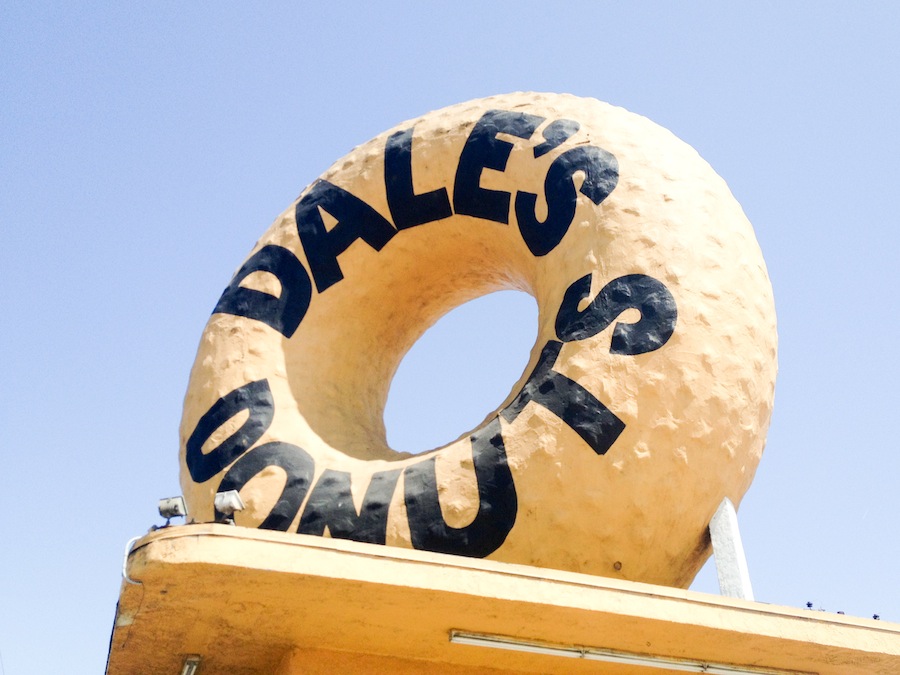 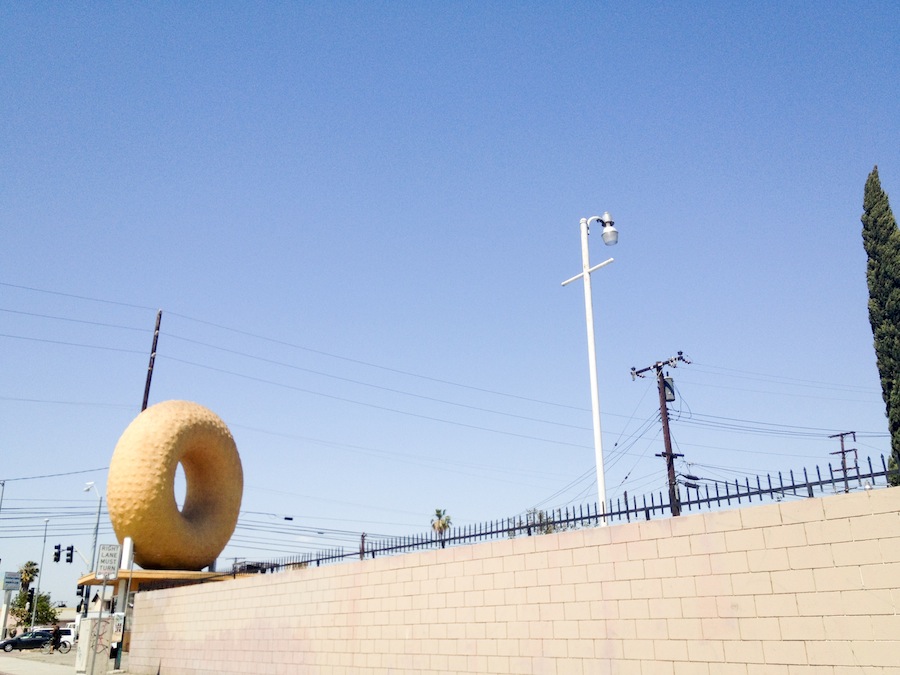 We then drove to the San Gabriel Valley to the Donut Hole, which consists of 2 half donuts that you drive through to order your donuts. 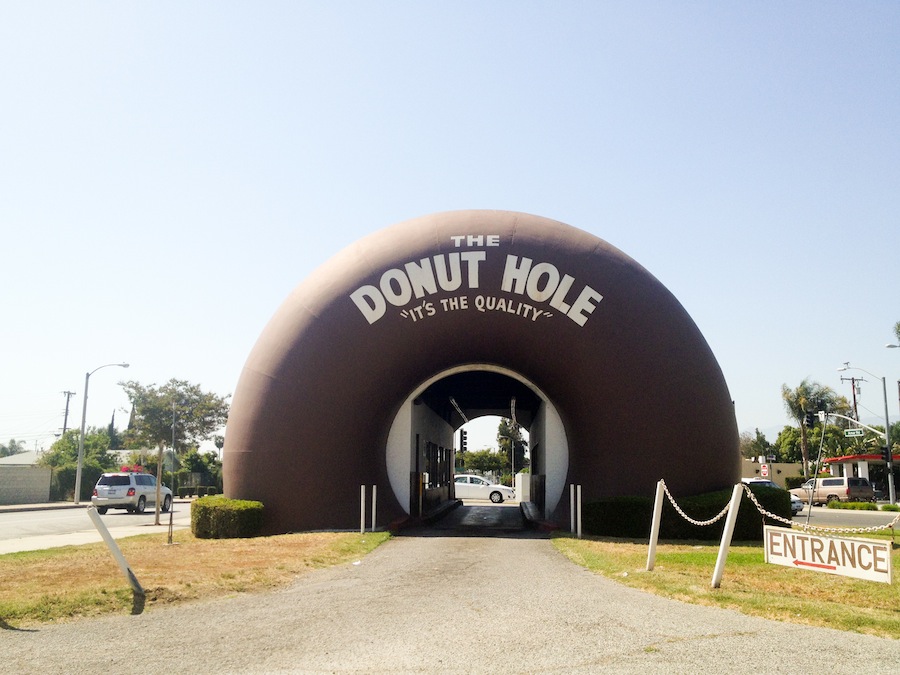 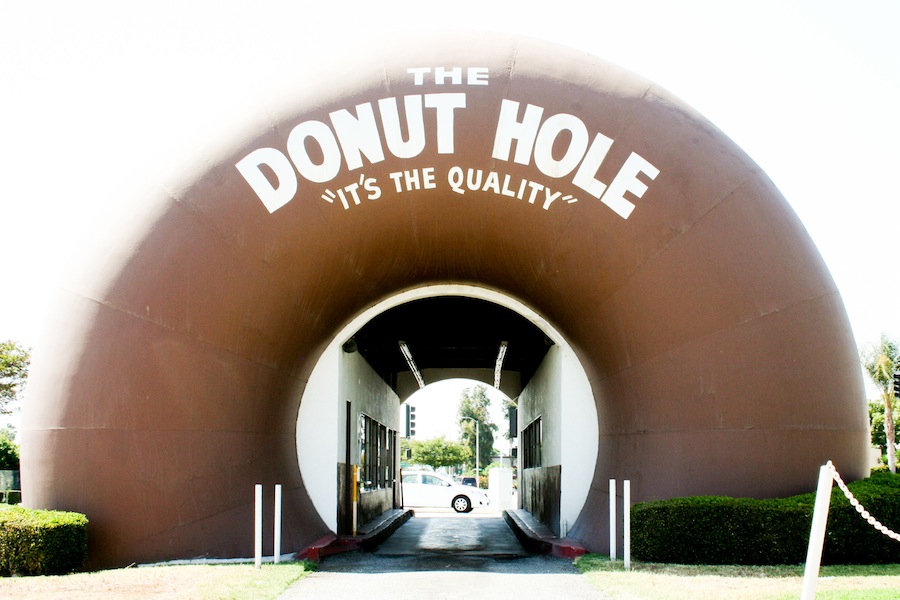 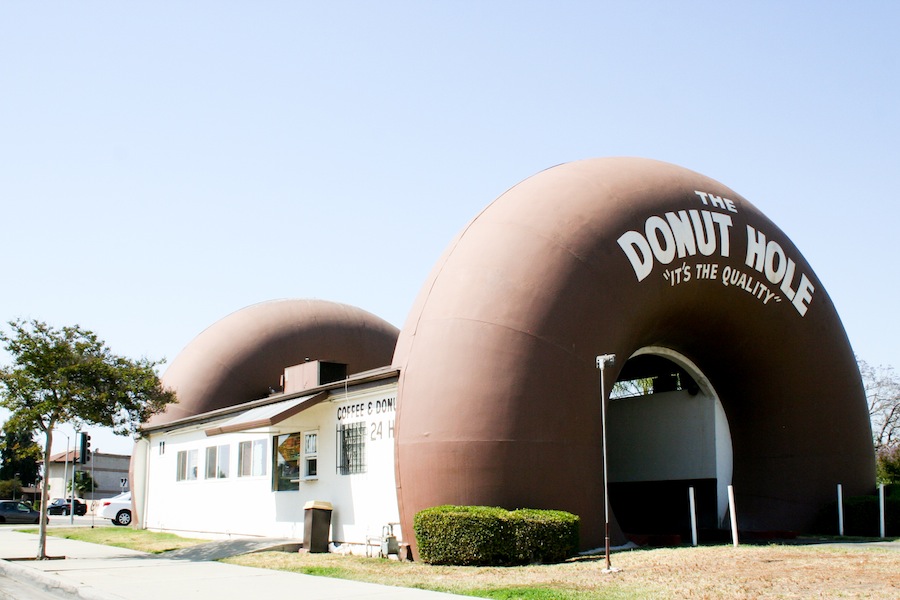 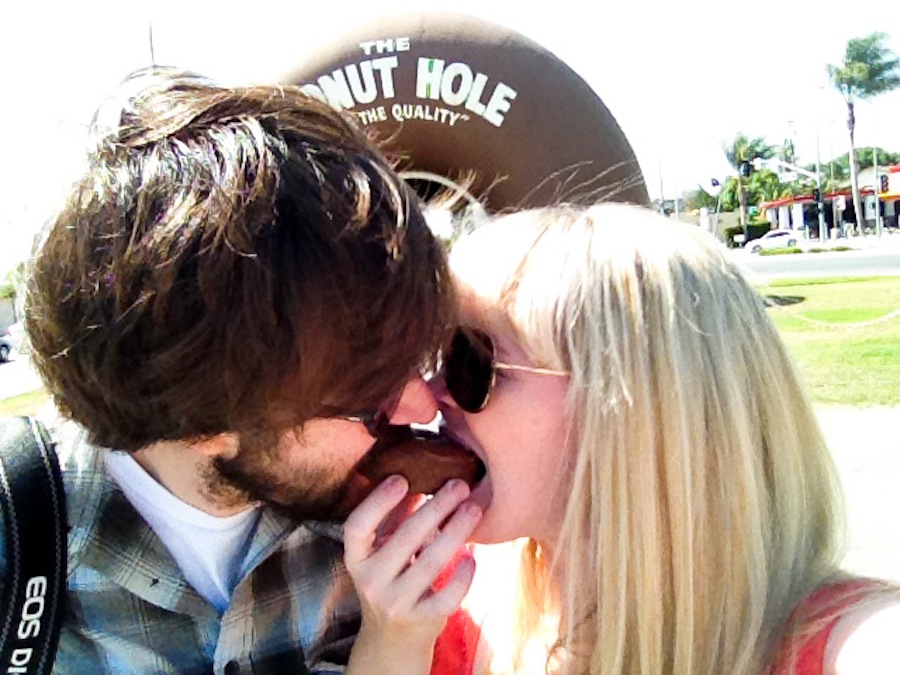 The Donut Hole in La Puente is the last of a chain of 5 stores. The mister said I saved the best for last since we actually got to drive THRU the donut! At the Donut Hole, we ordered a glazed donut for the taste test (If Dale’s was out, might as well give the Donut Hole a chance), a chocolate cake donut, and a chocolate chocolate with coconut shavings (one of my favorites.)

We then headed home for the blind taste test! 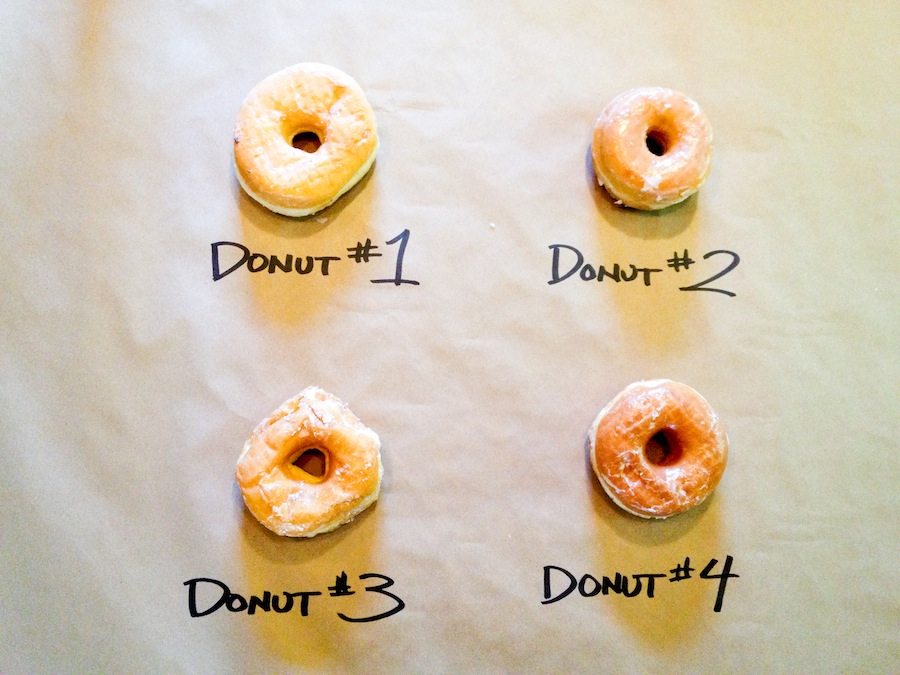 Now for the taste test we were not looking at the overall appearance of each donut, since some donuts had been sitting in the backseat longer than others and may or may not have been smashed. But we started with Donut #1 which was amazing! Donut #2, while appealing and perfect in shape, not so much, and was declared out fairly quickly. 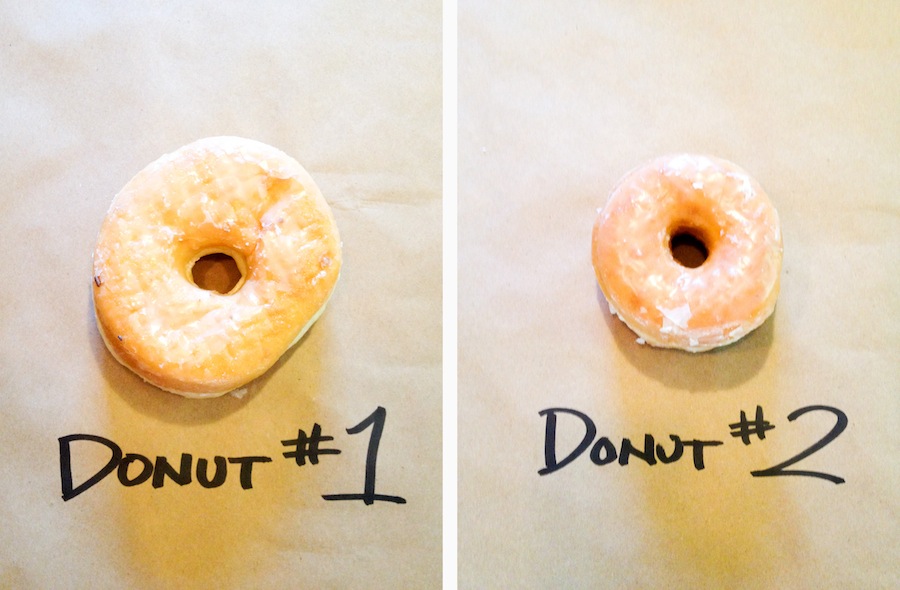 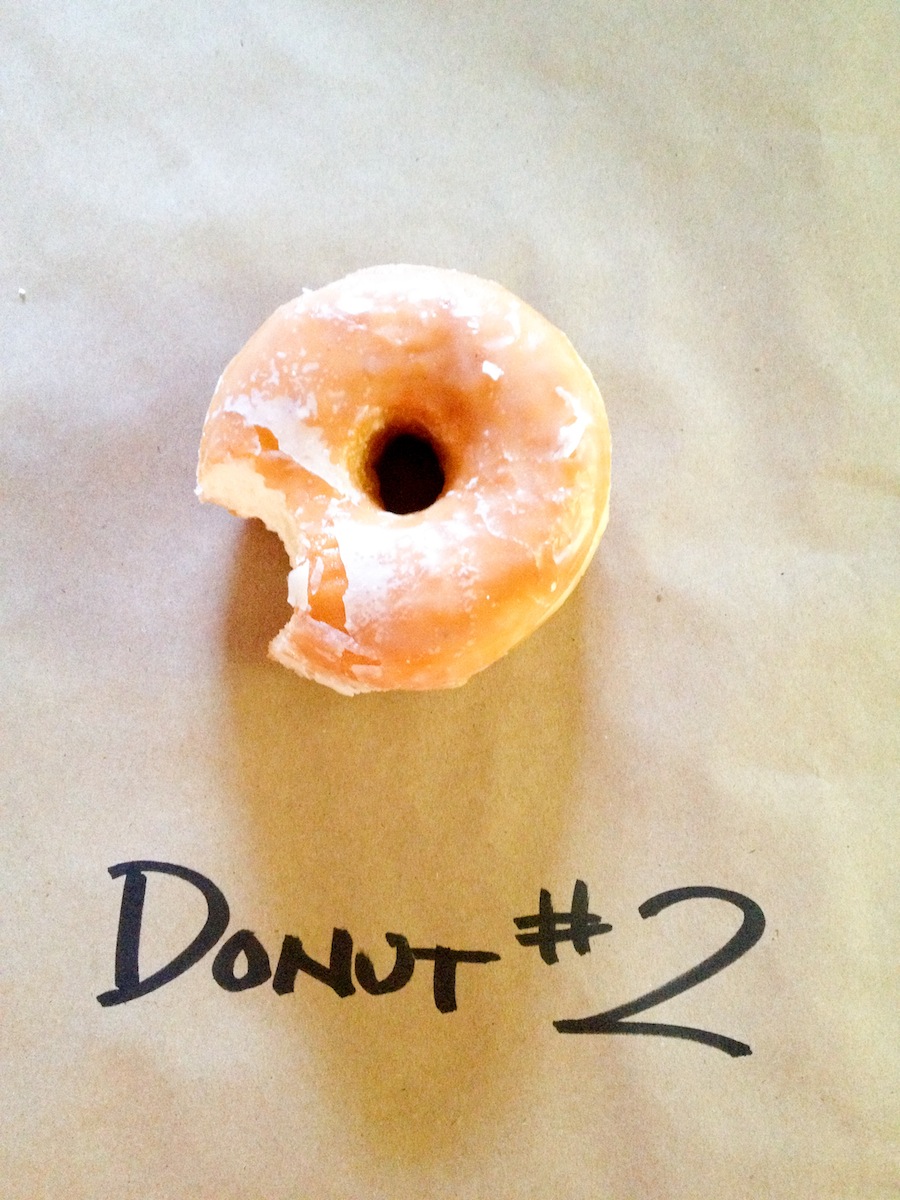 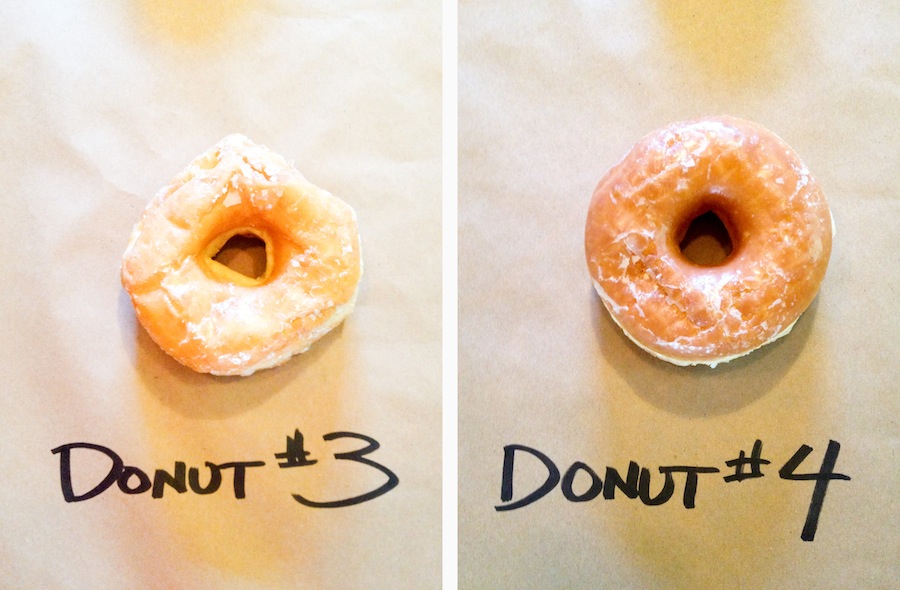 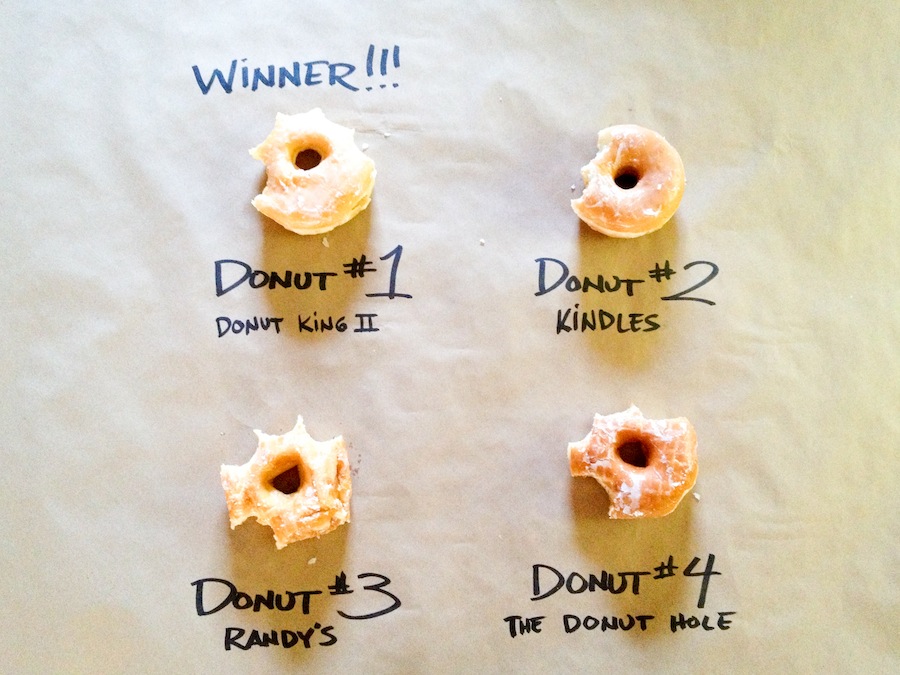 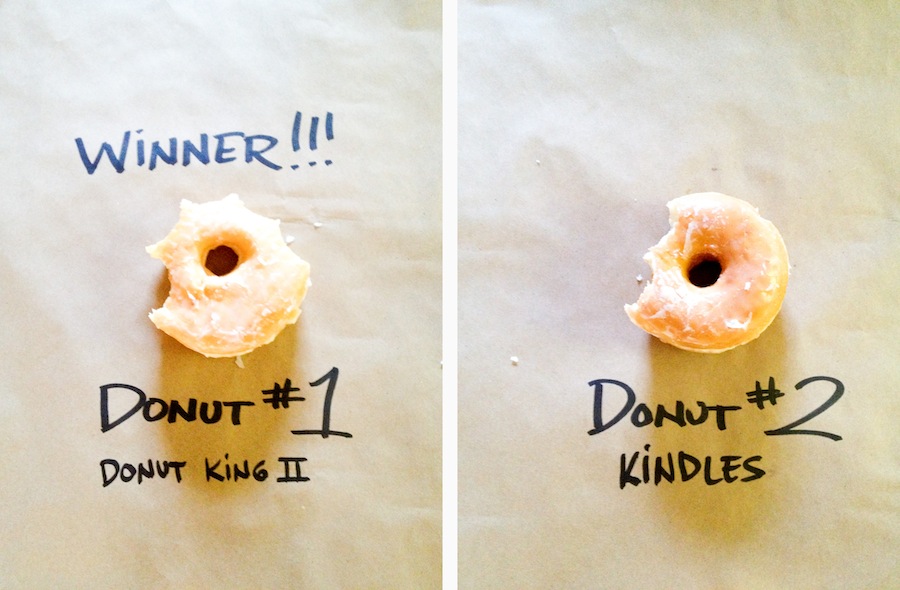 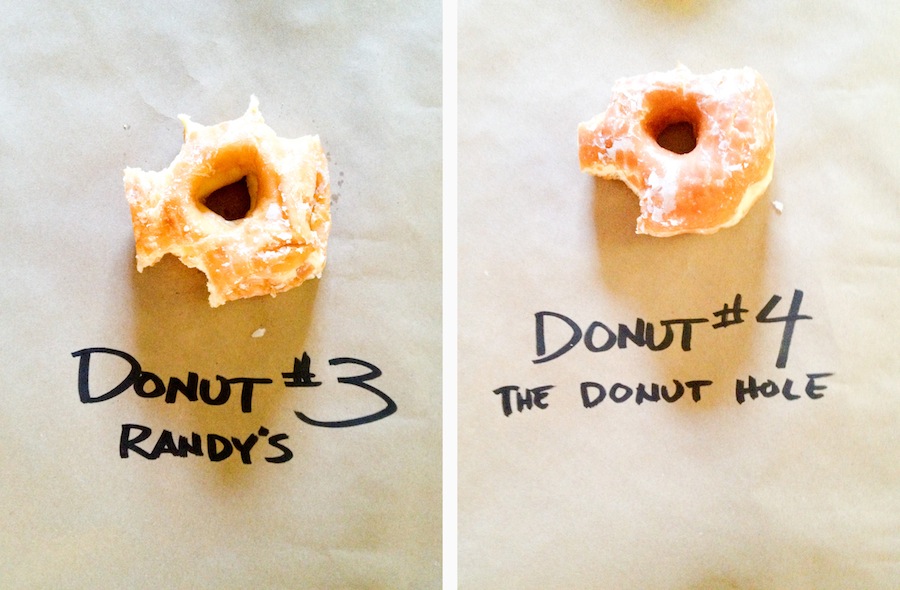 Congratulations to the Donut King II!

Looking at the grease stains, it totally explains why Kindle’s Donuts did not win: 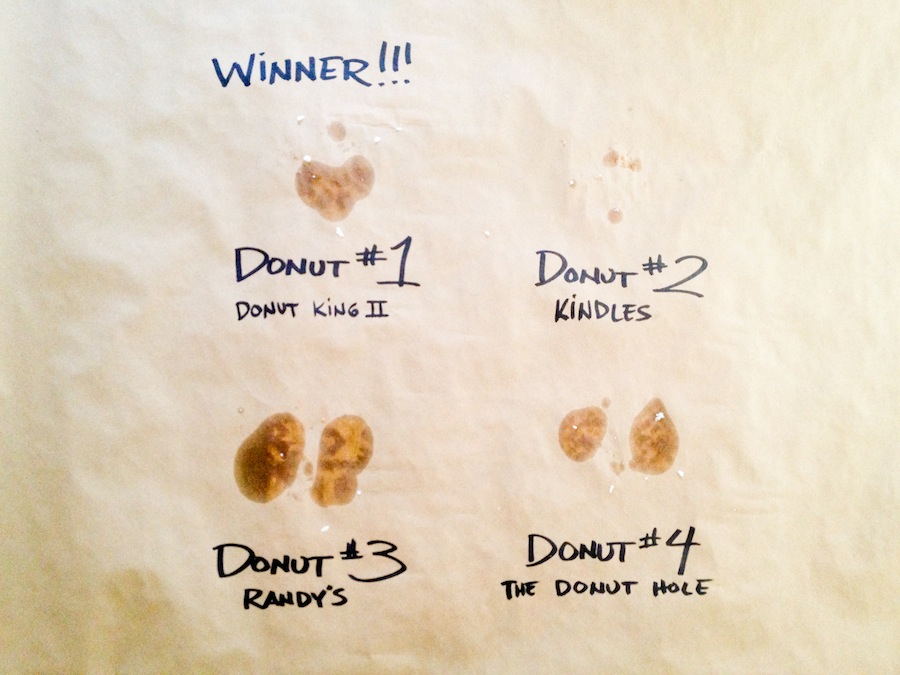 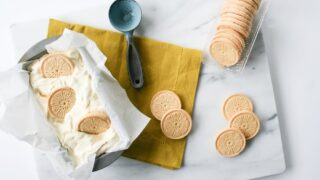 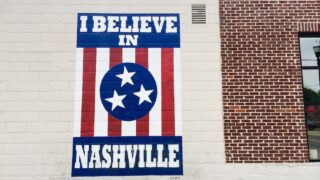 omg yummy! This looks like so much fun! xo www.laurajaneatelier.com